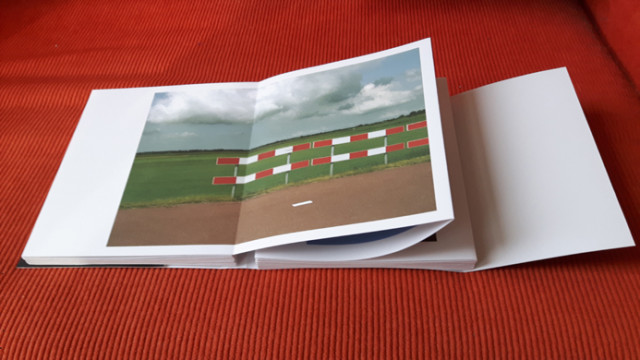 The theme of the project, ‘seeing distance’, is the opposite of that of a previous project, which focused on closeness, the direct environment, starting at the front door.
It’s quite special that one word, in this case ‘distance’, becomes the common theme in a photo project.
How does this work? Is this particular word the beginning, the first step toward something new?
No, it isn’t, as at the delivery of a project the question always is: what’s next?
And, the answer is: no people, no trees, not things; different from other projects.
Apparently, in this case ideation started from a ‘negative’ perspective.
That’s why the need for a ‘positive’ idea is still strongly present. It should at least be something new. De much-needed clarity suddenly appears.
While cycling, carrying my camera and tripod, I accidentally pass a place that attracts me because of a misty view that’s crossed by two large, black, plastic tubes.
The photo of that view immediately raises the question: what am I trying to capture here? The word ‘distance’ then comes to mind.
From that moment on I make photo’s that fit distance, and this word becomes the common theme for the new project.
Photos of distance are photos of landscapes, constructed landscapes, photos with a horizon.
Moreover, ‘doing and thinking’ apparently alternate each other.
By refining the zig zag movement, by meandering, new photos match well with previously taken photos. They form a unity.
Some colors dominate: green, yellow and white. A cycling path with white stripes becomes, almost unnoticed, a recurring visual element. Almost unnoticed, because apart from doing and thinking there is another factor that plays an important role: intuition.
The first photo from this project, published on the internet, received the following inspiring reaction.

“I was drawn to the photo --a stunning view of trees lining a river in an autumn landscape. The trees in the background form an arcade, while the two trees in the foreground anchor the scape. There is a breathtaking contrast between the trees that fan out in a spray of barren branches preserving delicate tufts of leaves and the solid bars flanking the view  of the river and the trees.--
The entire composition suggests an elegy to Nature that is not yet mournful. “ (Mara Lemanis 28-9-2018)

A project has a start and an end. The above describes the start.
4 years later project Distance consists of a selection of 40 photos. How many more will there be?
Ger Dekkers created an interesting photo book on Dutch landscapes with the title Planned Landscapes 25 Horizons (1977).
“The horizon has the function of the diameter (middle line, central area). Ger Dekkers continues, according to some critics, the tradition as a, contemporary of this era, ‘landscape painter’ , making use of an equally contemporary medium.”
Forty distance photos for a book would be a sufficient number, however, ‘forty’ immediately triggers a thought: 44 is a nicer number. One more, and the number is purely personal. That’s why the book, see the picture up here, contains 45 photos.
De photos for Distance are made between 2016 and 2020.