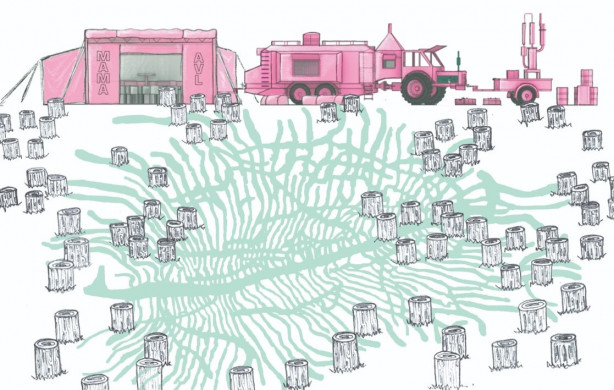 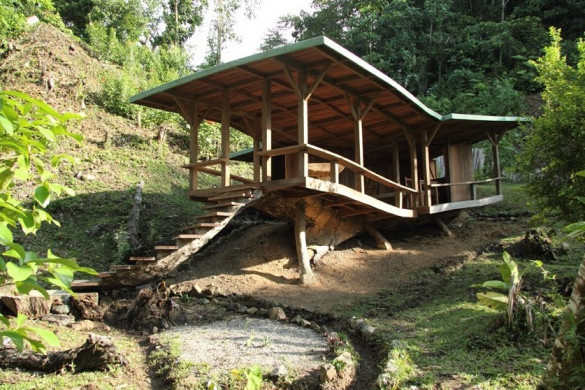 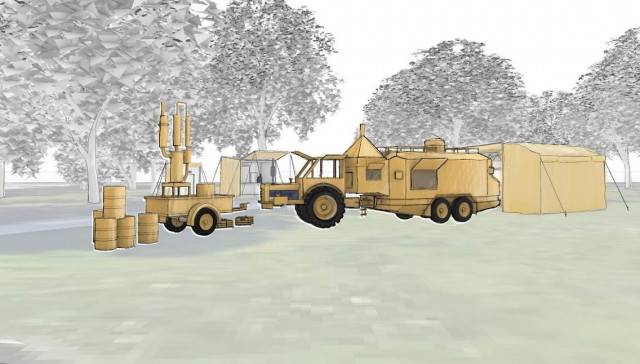 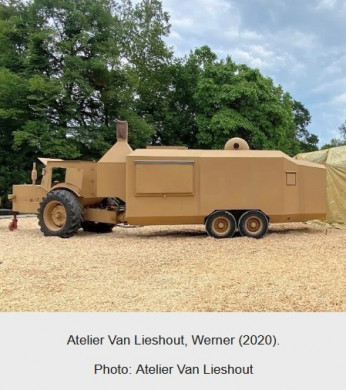 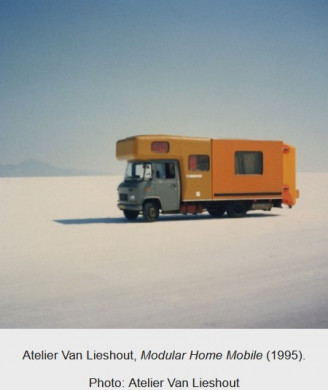 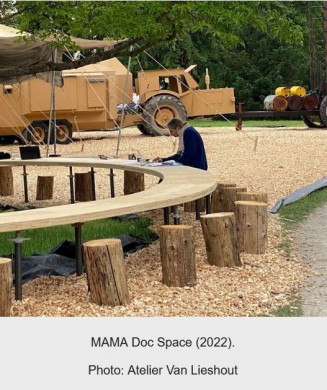 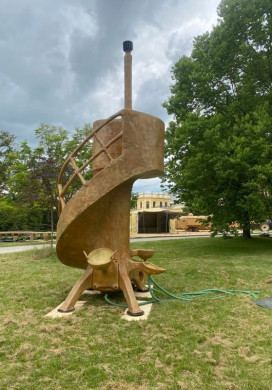 Más Arte Más Acción (MAMA), one of the fourteen inter-lokal lumbung members of documenta fifteen, has invited Atelier Van Lieshout (AVL) to collaborate with them for their participation in this edition. MAMA and AVL's shared history dates back to 2011 and now gets a new chapter.

Together they have created the MAMA Doc Space, an ensemble of functional pieces lead by the Werner, to create a mobile platform hosting a programme about, among others, climate justice and environmental rights; memory and the Colombian peace process; alternative non-capitalist ways of living in biodiverse territories; Afro-film narratives; extractivisms.

The beginning: Chocó Base

The documenta fifteen programme marks the continuation of the collaboration that MAMA and AVL first entered in 2011. Joep van Lieshout traveled to Chocó, Colombia and designed the Chocó Base, an artist's residency using a huge tree trunk as a base. Its shape resembles a boat. Van Lieshout imagined it as an ark for change, riding the waves of political turmoil. The Chocó Base was built together with local carpenters using locally sourced materials. It provides MAMA with a meeting place and space for reflection.

MAMA’s initial idea was to transport AVL’s Chocó Base to Kassel for documenta fifteen, both as a way to bring MAMA’s concept to Kassel and as a resource that could be sold to fund MAMA’s next chapter and the activities of its ecosystem. However, a series of conversations led to what would become AVL's contribution; MAMA Doc Space. Positioned between the Orangerie and the River Fulda, MAMA Doc Space is an ensemble lead by the Werner, a powerful vehicle with a trailer that functions as a documentation centre and living room. A second trailer with attached tent hosts workshops, films and other public activities. A 14-metre diameter wooden table, known as “the round table”, installed around a magnolia tree, is a meeting place for discussions and communal gatherings. The third trailer connects the Werner to the Pyrolyser that transforms waste plastics into diesel, which may potentially fuel the entire ensemble, as long as there is plastic to burn. The installation is completed with the Excrementus Megalomanus, a monstrous functioning composting toilet, that turns human excrement and other bodily fluids into fertilizer, inviting its users to consider their own waste, while  feeling closer to the earth than ever before.

The Werner was named after Werner Herzog and pays homage to the pioneer of the New German Cinema. He and like-minded filmmakers are driven by a deeply felt social and political commitment. They will go to great lengths and withstand all kinds of opposition to bring the truth to light and fight injustice. The Werner is fit to do just that. Its armoured body offers protection on any terrain, but instead of embrasures for guns its windows function as hatches to beam films from or for the handing out of food for thought. During documenta fifteen Werner is MAMA’s documentation center, living room and living memory, functioning as a place where the programme archive is safe and the archivist can sit, relax and reflect.

The Werner is part of a long line of mobile homes and platforms created by AVL over the past 25 years. Long before tiny houses, container- and mobile-homes became fashionable, Joep van Lieshout was building them. Among his creations are The Autocrat; a vehicle for survival off the grid, Modular House Mobile; originally exhibited at Skulptur Projekte Münster 1997 and now part of the Prada Foundation collection, A-Portable; a mobile treatment room for pro-choice organisation Women on Waves and The Good, the Bad and the Ugly; a mobile performance arts lab and library for the Walker Art Center in Minneapolis. Like the MAMA Doc Space and its Werner, all of these works are vehicles for change and platforms for the exchange of ideas. AVL’s work is always aimed at questioning, subverting and transforming rigid systems, in order to heal the natural environment, strengthen communities and to replace fossilized ideas by offering new perspectives.

During documenta fifteen, MAMA is part of the inter-lokal network, whereby collective resources experiment with the concept of lumbung. During this time, they will share their experiences and knowledge as an ecosystem. Furthermore they will reflect on climate change and deforestation, connecting knowledge and experiences gained in Colombian rainforests to the forests of Germany. During documenta’s 100 day duration, artists, activists and people from MAMA’s ecosystem will consider how monoculture and climate change have resulted in mass bark beetle infestations in central Europe. The programme hosted at the MAMA Doc Space consists of talks, walks in nature, possible dialogues, debates, open readings, exhibitions, performances, film screenings and workshops.

Documenta fifteen marks a time of re-imagining MAMA’s evolution. During the stay in Kassel new means will be developed to sustainably finance the organisation and secure its future. Atelier Van Lieshout aimes to bring funds to the programme and strengthen the joint community, by sharing the proceeds upon the sale of the MAMA Doc Space.

On 20th June 2022, Joep van Lieshout will have a conversation with the MAMA founders at the MAMA Doc Space about this current collaboration and Van Lieshout’s experience of their practice in Chocó.

Más Arte Más Acción was formed in Colombia in 2009 and is now part of an interdisciplinary network that connects international artists, Afro-Colombian and indigenous people, grass roots organisations and environmental, political and cultural initiatives. Together they discuss and rethink humanity’s relationship with the natural environment and human interconnection. The prevailing paradigm of individuality is challenged, drawing on non-western value systems.

Atelier Van Lieshout operates on the cutting edge of art, design, architecture, activism and radical social experimentation. Since the 1980s, Joep van Lieshout’s Rotterdam-based studio has collaborated across disciplines, cultures and national borders. Whatever form Van Lieshout’s work may take, from autonomous sculptures and installations to fully functional machines, architecture, urban plans and furniture, it always questions mechanisms of power, their underlying ideologies, while  proposing alternatives that extend beyond the scope of mainstream society. In 2001, this even resulted in the foundation of the infamous free state of AVL-Ville.

Click here for information about ‘A Space to Reflect – how it began’, conversation Joep van Lieshout and MAMA on June 20th.

A Trip through Berlin in 1900 in colour!