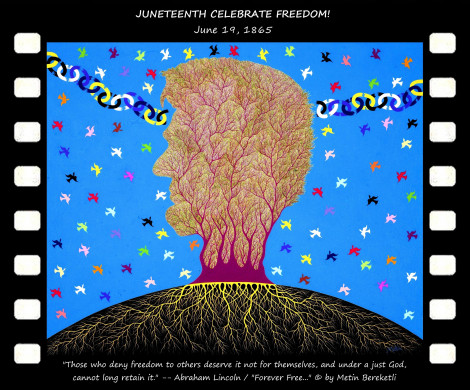 Juneteenth is a US national holiday celebrated annually on June 19. The day is also known as Freedom Day, Jubilee Day, Liberation Day and Emancipation Day and commemorates the liberation of the slaves in the United States. Metin Bereketli made a painting about it. And says the following about it.

President Abraham Lincoln issued the Emancipation Proclamation on January 1, 1863, announcing, "that all persons held as slaves" within the rebellious areas "are, and henceforward shall be free."

It commemorates June 19, 1865: the day that Union Army Maj. Gen. Gordon Granger rode into Galveston, Texas, and told slaves of their emancipation. That day came more than two years after President Abraham Lincoln issued the Emancipation Proclamation on January 1, 1863.

Even after Lincoln declared all enslaved people free on paper, that hadn't necessarily been the case in practice.

"Those who deny freedom to others deserve it not for themselves, and under a just God, cannot long retain it." -- Abraham Lincoln

"Forever Free" portrays a monumental Lincoln, mighty as an oak, nurtured by the global energies of mother earth, circled by a cloud of colorful birds (themselves symbols of peace and freedom), and a thick chain blown to pieces by the irresistible force of his majestic presence.

A letter of appreciation from the 39th U.S. President and the Nobel Peace Prize recipient Jimmy Carter!