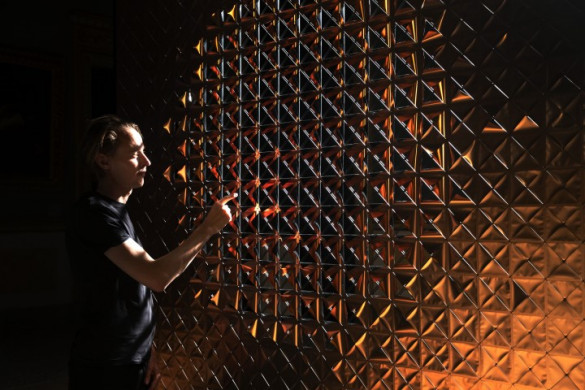 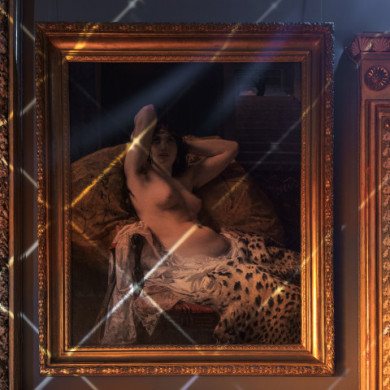 Lotus Oculus by Roosegaarde premieres at Milan Design Week. The living artwork is created of hundreds of light-sensitive flowers. Inspired by nature, the installation unfolds itself and creates a play of light and movement. Lotus Oculus at the Modern Art Gallery Milan is designed by Studio Roosegaarde and commissioned by Bulgari for the exhibition ‘Metamorphosis’.

Lotus Oculus is made of smart foils which respond to light and heat. Exhibited during the Salone del Mobile, the light-sensitive wall interacts with the viewer by unfolding its flowers, as if breathing, allowing light to shine through. With this play of light, Lotus Oculus activates the architecture of the historical Modern Art Gallery in Milan.

The specially developed material and design by Studio Roosegaarde is inspired both by nature and the radical use of material in the history of Bulgari. Lotus Oculus also pays homage to the grandeur of the Pantheon and continues this legacy by creating an organic architecture of movement and shadows. This dynamic dialogue is what artist Daan Roosegaarde calls ‘Techno-Poetry.’

Watch the short movie at https://studioroosegaarde.net/project/lotus

Metamorphosis of nature and technology

Roosegaarde describes this tangible connection between light and material as “a metamorphosis of nature and technology”. The Lotus series started in 2010 as an ongoing research into smart surfaces. In search of a new harmony between people and the environment, Lotus Oculus is the new work of art and a pilot for a more organic type of architecture.

About Studio Roosegaarde: as a social design lab, Dutch designer and innovator Daan Roosegaarde and his team connect people and technology in designs that improve daily life in urban environments and spark the imagination. It has won numerous international design awards. Internationally acclaimed works include WATERLICHT (a virtual flood showing the power of water), SMOG FREE PROJECT (the world's first largest outdoor air purifier which turns smog into jewellery), SMART HIGHWAY (roads that charge throughout the day and glow at night), SPACE WASTE LAB (visualising and up-cycling space waste), and URBAN SUN (cleans public spaces of the coronavirus).

SYNC, Daan Roosegaarde goes back to the landscape of his youth

Nieuwsredactie if then is now
12 november 2014