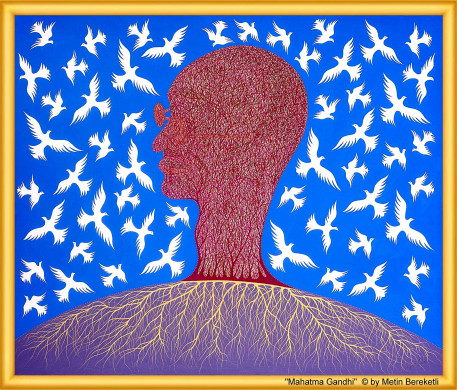 One of the twentieth century’s greatest political and spiritual leaders. Honored in India as the father of the nation.

"When I despair, I remember that all through history the ways of truth and love have always won. There have been tyrants and murderers, and for a time they can seem invincible, but in the end, they always fall. Think of it -- always." -- Mahatma Gandhi

The story of Gandhi and Candy

Once a mother took his son to Gandhi, asking the great leader to tell his son quit eating candies.  Gandhiji thought for a moment and then said: "Come back in two weeks."  Puzzled, the woman took his son home and returned two weeks later.  Gandhi looked at the kid's eyes straight and said: "Quit eating candies!" And the boy never ate candy in his life again. Years later, the same woman, asked Gandhi why they had to go back two weeks later just for him to say "no candies."  Gandhi's reply was simple. "Because when you first came to visit me," the Great Soul said, "I was eating candies too." -- Mahatma Gandhi

The original "Mahatma Gandhi " painting is NOT computer generated. It is created with infinite patience by the artist Metin Bereketli -- by millions of free-hand strokes applied with a thin brush on canvas through the aid of a magnifying glass. That's why you need a magnifying glass to see all the fine details in this unique painting.

10 Best Places to Visit in India

The History of India: Every Year