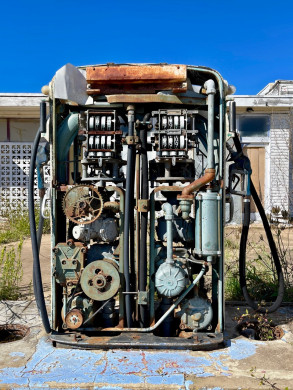 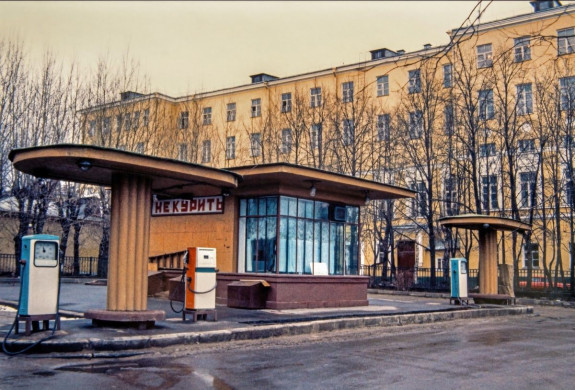 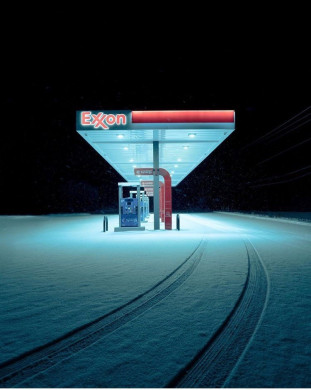 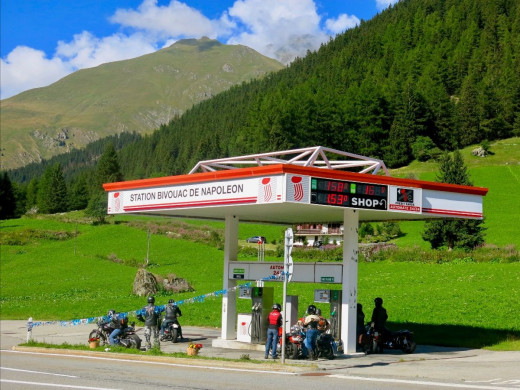 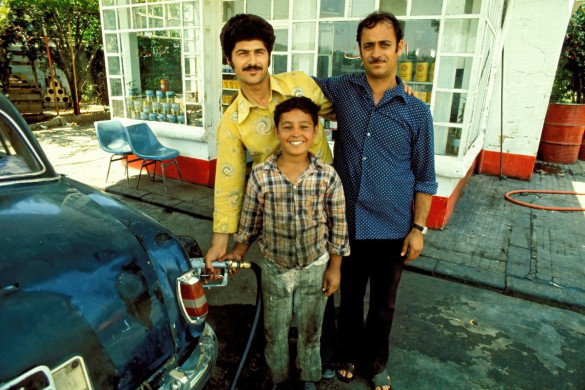 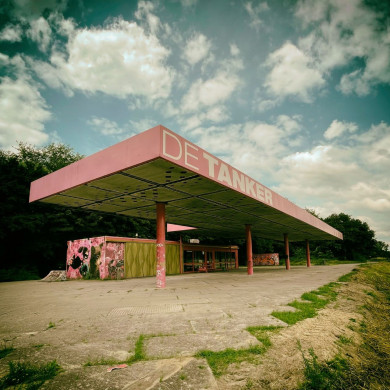 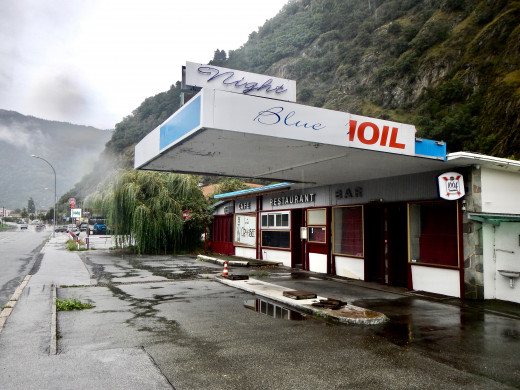 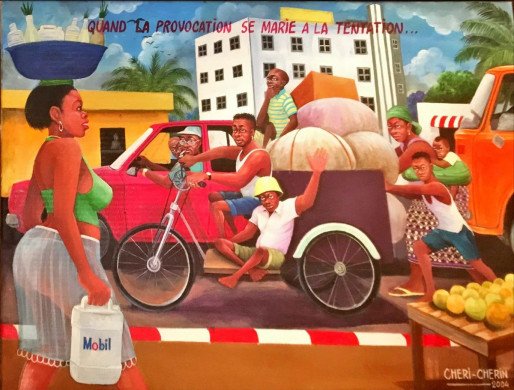 This exhibition offers a non-exhaustive look at Service-Stations highlighting their different aspects, past, present and future (do they actually have any future?), through a collection of photos and paintings in our private collection, gathered over the years. A cocktail of nostalgia, history, aesthetics, romanticism, social aspects, business, realism, and a pinch of humour. A tentative attempt to uncover the soul of the service-station, transforming a rather dull subject into a lively, creative almost sexy one.

Many consider the contemporary service-station as a necessary evil: let's be honest; they are generally ugly, occupy a lot of space, and are considered to be the symbol of the destructive use of fossil fuel, obviously harmful to the environment. Some might define them as “non-places”, much like motorways, hotel rooms, airports or shopping malls. The term “non-place” was coined by French anthropologist Marc Augé. In his book “Non-Lieux. Introduction à une anthropologie de la surmodernité” Augé refers to spaces of transience where human beings remain anonymous. These spaces do not hold enough significance to be regarded as "places" in their anthropological definition, that is, places that offer the possibility of a shared referentiality and that can empower common identities. Nevertheless, these establishments have become a ubiquitous part of our environment. Any vehicle user, whether owner, driver, or simple passenger depends on them completely, willingly or not. These places of public utility are inherent to our daily life and means of auto-mobility.

Historically, service stations, petrol pumps or gas garages have been around for more than a century around the globe and consequently, many older stations have become the stuff of nostalgia, romanticism or even history. Many of them are now abandoned, falling apart, or refashioned for other purposes. They now reflect a certain charm, symbols of another time, of a more optimistic, hyper-capitalist time even, when the aspiration to own a car was second only to that of owning one's own house. For some, nowadays, an abandoned service station along the road is simply a symbol of a decadent capitalistic society on its way out.

Although we may hate to admit it, there is also a very social aspect to service stations. Gas stations are hardly ever considered to be social spaces. However gas stations, as well as other kerbside artefacts, abound in social life. People use them as meeting points, resting places, mini markets, coffee shops, sandwich bars and use services such as car washes. People continuously cross each other and interact. The smile of the cashier can be refreshing (in the old times it was the smile of the attendant at the pump) or even flirtatious.

This social role has evolved in the last decades with the expansion of shops into supermarkets and restaurants. In some cases, the service station is only one element, integrated into what has become a shopping mall complex along the highway. There also are special cases, like the one in Dinteloord (Brabant) which has integrated a library, open 7 days a week. A great public service!

Service Stations usually have a short lifespan. They must constantly be renovated, refurbished, upgraded to remain competitive. In the Netherlands the lifespan of functional constructions is generally calculated to be 7-10 years. Regular renovations are required to maintain competitiveness (new pumps, bigger shop, new look, etc..). Filling stations that have lost their competitiveness are either removed or, in some cases, simply abandoned.

Also, changes in laws due to urban redevelopments or new environmental requirements may dictate the destiny of service stations, triggering a relocation or even an elimination, especially in city centres. The latter is quite evident in Amsterdam where the amount of assets has drastically diminished in the past decades. Standalone urban service stations are slowly disappearing, others are redeveloped along highways or integrated into large shopping centres.

Some service stations have embarked on a new life, like this one in Amsterdam Noord which has become an art & event venue. Even more ironic perhaps is a station near Martigny, Switzerland which became a roadside sex club (since closed as well).

Will the boom of the electrical car ring the bell for the filling stations? Online energy delivery is becoming a reality. Charging stations are available not only in service stations and restaurants along the highways but also in shopping centres, parking places, community centres and even private houses. Will the spread of electric car charging stations over the city make the need for specific filling stations redundant? There was recently the mention of a law passed in the Californian city of Petulama, prohibiting the building, renovating or relocating of new or existing service stations. Will this become a new trend?

What has become undeniably obvious is that the peak of service station construction, globally, was from the 1960s up until the early 1990s. Since then, their decline has become inexorable.

Are Service Stations as we know them endangered species? Will the next generations consider them as historical curiosities, fossils from the age of fossil fuels? If so, we might want to contemplate the totality of this exhibition as one big nostalgic piece, an ode to the once ubiquitous service-station.