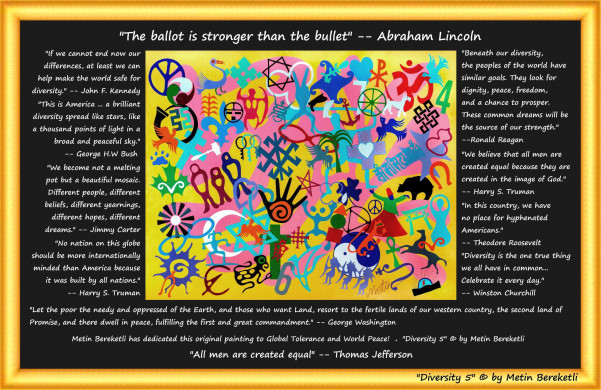 A call to vote from Metin Bereketli with comments from several past USA presidents and a leading British Prime Minister in very difficult times.

The ballot is stronger than the bullet -- Abraham Lincoln

"Let the poor the needy and oppressed of the Earth, and those who want Land, resort to the fertile lands of our western country, the second land of Promise, and there dwell in peace, fulfilling the first and great commandment." -- George Washington

"Beneath our diversity, the peoples of the world have similar goals. They look for dignity, peace, freedom, and a chance to prosper. These common dreams will be the source of our strength." -- Ronald Reagan

"This is America ... a brilliant diversity spread like stars, like a thousand points of light in a broad and peaceful sky."   -- George H.W Bush

"No nation on this globe should be more internationally minded than America because it was built by all nations."  -- Harry S. Truman

"If we cannot end now our differences, at least we can help make the world safe for diversity." -- John F. Kennedy

"We believe that all men are created equal because they are created in the image of God." -- Harry S. Truman

"Diversity is the one true thing we all have in common... Celebrate it every day." -- Winston Churchill

"In this country, we have no place for hyphenated Americans." -- Theodore Roosevelt

As you might remember, in the past, Metin's original painting "Diversity 5" painting broadcast on Central Perk Coffee Shop of NBC’s smash TV series F.R.I.E.N.D.S!