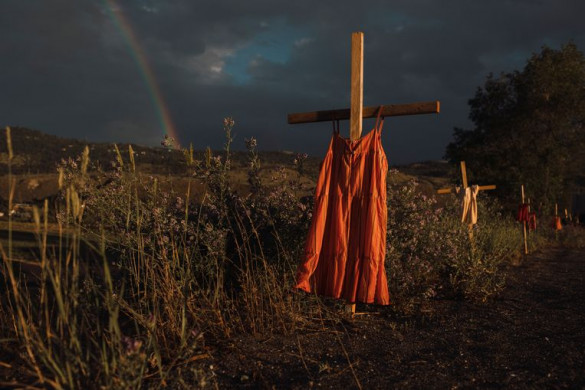 Amber Bracken’s photograph commemorates the children who died at the Kamloops Indian Residential School, an institution created to assimilate Indigenous children, following the detection of as many as 215 unmarked graves in Kamloops, British Columbia.

Effendi said about the photograph: “This is a quiet moment of global reckoning for the history of colonization, not only in Canada but around the world.”

Residential schools began operating in the 19th century as part of a policy of assimilating people from various Indigenous communities into Western, and predominantly Christian, culture. Upwards of 150,000 children passed through the doors of residential schools, and at least 4,100 students died while at the schools, as a result of mistreatment, neglect, disease or accident.

Bracken said about her photograph: “Colonial history is not ancient history [...] this is a living history that survivors are still grappling with. If we want to talk about reconciliation or healing, we need to really hold and honor the heart that still exists there.”

The story gained relevance again this month when Pope Francis apologized to a Canadian First Nations delegation for the Catholic Church's role in the country's residential school system.

Pope Francis said during a speech at the Vatican: “I feel sorrow and shame – for the role that a number of Catholics, particularly those with educational responsibilities, have had in all these things that wounded you, in the abuses you suffered and in the lack of respect shown for your identity, your culture and even your spiritual values. All these things are contrary to the Gospel of Jesus Christ. For the deplorable conduct of those members of the Catholic Church, I ask for God's forgiveness and I want to say to you with all my heart: I am very sorry.”

Bracken is the fifth female World Press Photo of the Year winner. Her recent work has focused on the ongoing legacy of intergenerational trauma from residential schools for Cree and Metis youth, Wet'suwet'en reoccupation and land rights fights, the overrepresentation of un-housed Indigenous people displaced in their historic territories, and interrogating the impact of race in her own family.

Find out more about the photograph https://www.worldpressphoto.org/

Infinite Identities, Photography in the Age of Sharing (Huis Marseille)

Infinite Identities, Photography in the Age of Sharing (Huis Marseille)