Home » Article » An incredible history of the Chicago Cubs #2 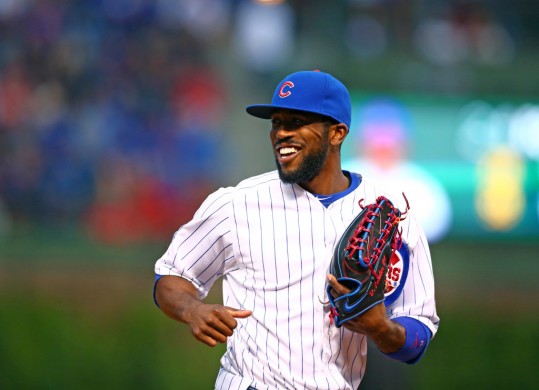 What a great month it has been...What a rare and wonderful mood I am in....and it's the CUBBIES! It's the Cubbies! They have given me a bad case of spring fever.

...And while there is lots  of good news, there is also a little bit of bad news. However, even the bad news can be broken down to good news/bad news. Huh? Hey, I'll get to it!

Jon Lester said of the team, "You play today, you win, you enjoy it, you lose, you move on and show up tomorrow and the slate's clean. It's back to 0-0. This team has done a good job of that." That's the winning attitude!

Indeed. There record for the first month of play is 17 wins and five loses; a .773 average. Of all the major league teams---29---the next best team in the w-l category is the Washington Nationals at 16-7 for a .696 ave. Ironically, the crosstown Chicago team, the White Soxs, are the third best team with a 17-8 (.680%) record. People are already talking about a subway World Series. WOW!!! Chi-Town would go crazy!

That's the good news in a nut shell. Then there is the good news-bad news scenario. The goods news is Cub's pitching. Fabulous! Arreita, the Cy Young winner for best Major League pitcher, last year, is 5 - 0 with an ERA of 1.00. Oh, yeah, he also has a no hitter; every one is expecting and talking about his next no-hitter which they expect to experience once again the season. Hammel is 3 - 0 with a 0.75 ERA; Lackey is 3 - 1 with a 4.97 ERA; Lester is 2 - 1 with a 1.83 ERA. There bull pen has totaled 53 innings, fewest in the big leagues. The pitching has been the secret as to the Cubbies success. It was expected to be good, but this good? Only in our dreams.

Joe Maddon, the manager, said "Everybody is talking about offence but primarily the pitching and defence has set this up." Exactly! But, with that said,  the offence has outscored opponents 135 to 57; the best run differential in the Majors.

The bad news is the Cubbies hitting. This was what was to be their key weapon. The reason why they would make it to the play-offs and beyond. Basically the hitters are still in Spring Training. At least the ones that have been expected to be the leaders in battng averages. Zobrist is hitting in 20 games a miserable. 260; Heyward is worse with 22 games and an average of .224; and the young kid Rizzo is stuck at .218, however he leads the team with 8 home runs. And Russel, the 21 year old, is hitting .214. But, he has won more than a few games with clutch hits when they really counted and great defence.

There are a few batters living up to or surpassing their hype: La Stella, 12 games and a .400 average; Szczur, 12 games and .333; Bryant, the other boy wonder, is at .289 after 21 games. However, the most heart warming story---if not also the most ironic---in what might be an historical season for the CUBBIES, is Dexter Fowler. A year ago, he had a one year contract for about $8 million. And he would prove to be the key if not main ingredient to the CUBS' potentially spectacular season that sent them to the playoffs. He came through with hits when needed; got on base to lead with runs scored....Then came the end of the season.  He sat down to negotiate a new contract. His agent asked for $15 million and multi-years. The Cubs said, "No!" Well, I thought that a mistake. It was, but it turned out it wasn't one that would cost the Cubs. As of the beginning of Spring Training, no one had claimed Fowler and he was unsigned. His agent called the Cubs and said, "You want him for last year's price?" Sure, was the answer. How very fortunate for all. At the end of this season,  he may get his $15. million

Only one really sad factor and that's the young catcher Schwarber who came up last fall and just couldn't help but hit homeruns. In his second game of this season he ran into Fowler, in the outfield, and tore ligaments in one knee. He is  out for the season. The Cubs had three catchers to start the season. A real luxury. Last week Montero was injuried and they are down to one Major League catcher, Ross. They had had to call up a kid from the minors.

The final view on April? How sweet it is!!! But, hey, it is a long season. Twenty-two games have been played and there are 160 regular season games to go.