Home » Article » An incredible history of the Chicago Cubs #4 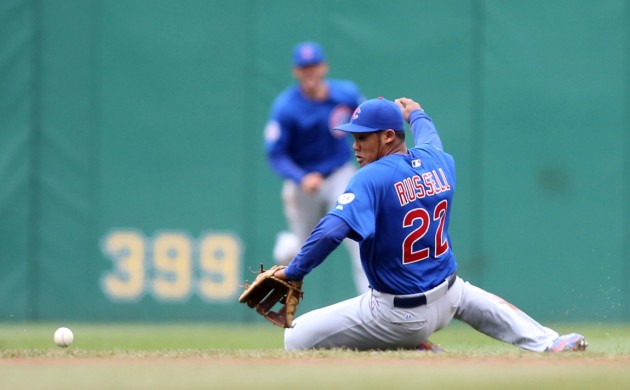 Today is the 8th of May. The two top teams in Major League baseball---by win-loss percentage---are the Chicago Cubs and Washington Nationals. These are two teams that the experts of predicting will meet in the playoffs at the end of the regular season. We had a preview of what that series could be like, this week, as the two teams met for a four game series at Wrigley Field in Chicago. The Cubbies have won the first three games.

The third contest was probably the most dramatic. The Nationals were playing well. But so were he Cubs...and better. And, once again, it was Addison Russell, the 22 year old, who made the big difference. Though batting a measly .217%, he drove in three runs in the 8-5 victory. Two of those runs came from a double he hit in the 7th inning when there were already two outs. Clutch hitting at its best! As of this date he is hitting .313 with runners in scoring position. Phenomenal!

The fourth game, on Sunday, 8th May, will have the domineering Arrieta on the mound going for win number 7 against no losses. A rumor says, the Nationals flew out of Chicago on Saturday night and will phone in the Sunday game. Whatever!

Well, the rumor was wrong. The Washington Nationals did take the field on Sunday against Arrieta. Unfortunately, it wasn't one of his best days. He pitched five innings, gave up three runs---one unearned. He needed 99 pitches to get through the five innings and that compares to his 119 pitches in his nine inning no-hit game in April.

But the game wasn't over. The Cubs won dramatically, in extra innings, when in the 13th., Baez lead off with a walk-off homerun. This made the Cubs record stand at 24-6 which matches their franchise history start of the season record first recorded in 1907. The Cubs would go to the World Series that year.

11th May:  Cubbies lose two consecutive games for the first time this season. Ironically, they lost them both on the same day. The Tuesday game, against the Pirates  was postponed because of weather conditions so they played two on Wednesday losing one game 7-4 and the other 1-0.

14th May: Arrieta won again on the mound and against the Pirates and posted his seventh win against no loses. With this win "He's now given up three or fewer runs in 28 straight starts, the longest streak in the majors since 1893. 1893? WOW!!! Also he has won his last 18 decisions, the fourth longest streak in MLB history since 1918.

Addison Russell looks more and more, everyday, like a superstar in the making. Against the Pirates, on Friday, he smacked a homer with two on to beat the Pirates 9-4. The next day he showed his support for Arrieta---see above--- by hitting another homer with one on base in the 8-2 win over the Pirates.

18th May. USA TODAY, once a week, has a column labeled: "Power Rankings." It list the 29 major league teams by points with 300 the best. The Cubbies have been at the top for several weeks. The comment made by the editor was: "They win 7 out of 10, and it feels like a slump."

And on the 20th, Arrieta went seven innings winning against San Francisco Giants, giving up one run, four hits. He is now at 8-0. Maddon, the Cubs manager said, "And he still isn't that sharp. Wait until he gets into the grove!" A. Russell showed his support, in the effort, by hitting another homer with a man on. He has raised in batting average to a respectful .263.

Between the 21st and 23rd of May, the Cubs lose three in a row. Their longest losing streak of the season. They came back to win the next six. What a team!

Arrieta was back, on the mound, on the 25th of May. It was a sloppy start for him. He pitched only five innings, gave up seven hits and four earned runs. However, he got the win as the Cubs scored nine and the St Louis got eight. The Cubs have now won 23 consecutive games when Arrieta has pitched. It ties a major league record. He was asked, "What it will be like when he does lose a game?""  His reply, "Hopefully, not this year! and he was serious.

In the game of the 30th of May, the Cubbies used five pitchers. The starter, Hammel, left after two innings with cramping in his leg. He had given up one hit and no runs. The next four pitchers pitched perfect ball:  No hits, no walks, no runs. Phenomenal!

At the end of the month, the Cubs had a .714 winning percentage. The tops of both baseball leagues. Can anyone still doubt this teams ability to play in the World Series?

The Cubs' starting pitchers, all five combined, have less than a 3.00 ERA.

So far, in the ALL STAR voting the Cubs players rank as follows: At 1st base, Rizzo is first. At 2nd base, Zobrist is first; at 3rd base, Bryant is first; at SS, Russell is first; in the outfield, number two in the voting is Fowler and number 4 is Heyward and number 6, Soler. It doesn't get any better.

Sneak peek into June: As of June 4th the Cubbies have won 10 of their last 11 games.