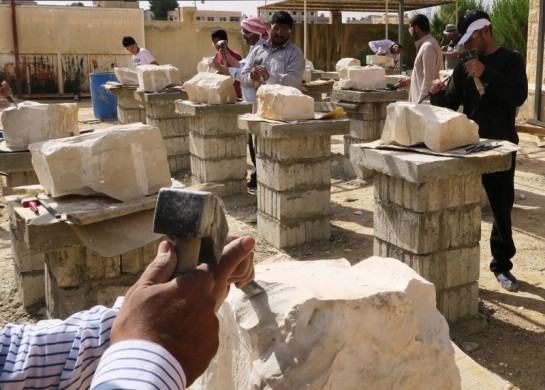 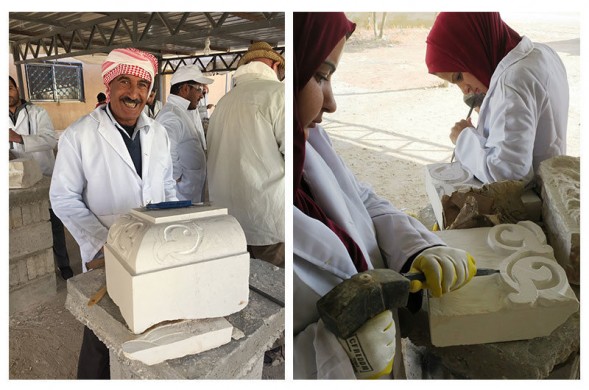 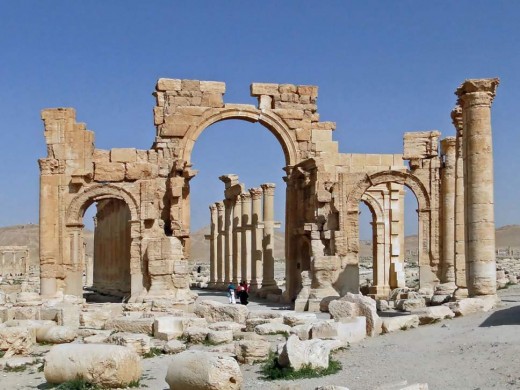 Tools imperative to civilizations from time immemorial—mallets, chisels, tracers, gouges—are becoming the beacons for a new vision in age-old cultures.

But refugees in the desert town of Mafraq, Jordan are brandishing chisels and hammers against the devastation.

At Mafraq, Jordan a conservation stonemasonry program began in the fall of 2017.  In a workshop funded by the World Monuments Fund and the Petra National Trust of Jordan, a small cadre of women and men, young and old, bend over huge limestone blocks, chiseling them into replicas of ancient monuments. They are honing the ageless craft practiced by stonemasons who sculpted the portals of the antique world.

Some of the students come from the refugee camp in Mafraq, some from the desert to the east, where over 80,000 live in the corrugated shacks of Zaatari Camp.  As they train in the year-long program of restoration stonemasonry, their aim is to rebuild the heritage sites and the ornamental architecture that famously graced the millennial cities known as the glories of the ancient world.

Studying the essentials of geometry

The tools they wield do not compete with the devouring talents of the digital age. Cyberspace cannot displace the pounding of hammers, the suppleness of hands. The refugee masons carve reliefs, curves, arabesques, and balusters into a variety of geometric figures and shapes, In their devotion to their materials, they start to inhabit the stone.

Rising at 5 a.m., they study the essentials of geometry and basic engineering before tackling the pedestal blocks to shape them to their will in the time-honored tradition of manual technique. These apprentice stonecutters are acutely aware that their increasing expertise is unlikely to help restore the ravaged sites of their former homes for a long time to come. Their determination and sentiments revolve around the principle of being ready to use their new skills at such time when the Syrian war has ended and rebuilding can begin. As masonry was nearly a lost art long before the war, the students believe their aspirations will not be in vain but will fill a cultural void.

World Monuments program director, Stephen Battle, is quick to point out that even if the will to reconstruct is strong, and even if the funds to effect preservation are available, nothing will be done unless people practiced in conservation skills are directly called in to work through the ruins.

One of the trainees, Owaish Jabra, lives with memories of the marble courtyard and glorious minaret at Aleppo’s Great Mosque. That courtyard lies under debris now, singed, riddled with bullet holes. She can only say that it hurts her heart to look at what it has become.

An especially talented student, Mahmoud Rafeeq al Quasem, says he needs to bring out what he feels. When he looks at what his chisel has carved, his feelings claim: “The stone belongs to me.”

A preserved heritage has always served as the foundation of a people’s identity, the symbol of their civilization inscribed in monuments, scrolls, artifacts that bond them to their history and culture. Dressed stone facades, buildings, sculptures are icons of communal life and pride. A broken icon derails a people’s ethos, breaks their spirit of commonalty.

They labor to make the stone revive the lives they lost. It is a vision of old resolved anew.

The Theatre of Wrong Decisions: Monument for murdered Authors and Journalists

The Theatre of Wrong Decisions: Will we be in time?

The Theatre of Wrong Decisions: Why can’t we stop the nightmare in the Middle-East?

The Theatre of Wrong Decisions: Who's next? - Кто следующий? - من التالى؟

The Theatre of Wrong Decisions: Are we facing the final crusade?

The Theatre of Wrong Decisions: Does Power always corrupt?