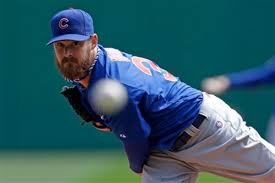 "You gotta look on the bright side of life..." Kid you not, son.

I see a silver lining in the dark skies over Wrigley Field!

Take my boy Starlin the "STAR."  He is batting .315 and already has two homeruns and six RBIs. Last year, towards the end of the season, he started showing signs that he had the power to hit the ball out of the park.

I am glad you brought up the Cubbies. While their won-loss figures are admittedly dismal there are several indications that it is just a matter of time before they break out of this bog and present a real challenge to their division.

I mentioned the young pitcher Wood recently. He pitched five hit ball for seven innings, yesterday, and gave up one run against the mighty Cardinals. And, fortunately, only one run since the Cubbies only came up with two. Then there is Feldman and the ex-Notre Dame football player---whose name I can neither pronounce nor spell. The latter has had seven "quality"  starts but weak hitting shows him with a poor win-loss ratio. Another very good pitcher, Garza, has been out with injuries since spring training.
The bullpen has needed readjustment, but it is looking good now.

Hitting has been the weak spot, but there are good signs that that may be picking up. Rizzo, who had a bad beginning and was batting only .137 two weeks ago, now has eight home runs, 25 rbis, and has raised his average to about .240. I expect him to improve on that too. Unfortunately, Barney has not got into the grove. He was hurt just after the start of the season and is still batting a paltry .143. Castro has hit safely in something like 25 of 27 games I think it is.

At this point I am not discouraged.

There is one mystery though and that's your Angels. They have a few outstanding players like Trout, but don't seem to be putting anything together.

DREAM ON, WHITE BOY. THE CUBBIES WILL FINISH UNDER .500.

Again, you ignore the facts.

So far this season Cub's starting  pitchers have turned in 21 quality starts with a 2.01 ERA, but only won eight of the games.

...And young Rizzo is showing more life. YEsterday, he was 3 for 4 against the Cards and has raised his average to .270; he has 10 doubles to go with the 8 homeruns. There is another guy, in right field, Schierholtz, who is batting .299.

...And the pitching...Again, Samardzja has been on the loosing in his games because of the lack of hitting...But I expect it to come. And in the bullpen, there is a guy named Gregg who has now recorded five for five saves in just the last tens days or so.

You got to look below the surface to appreciate the game and a teams potential.

Actually, I am looking forward to what could be a surprising season for the glorious Cubbies....

Oh, I read this week that the third franchise for a New York professional soccer team has been sold for $100,000,000. Several months ago, I was talking with an American with regard to soccer. I told him what you had said that the game would never catch on in AMerican. His reply was short, "He's wrong about that!"

Here's a fact YOU are apparently ignoring::

White Rock has split their last 6 games, as Ryan is only 8 for 33
during his last (11) games, which includes a 1 for 3 in his second
AAA call-up game, on May 1st. His defense, however, has remained
solid at 1B, as well as in several mound appearances. As earlier
reported, he, his father and his younger brother combined for 19
strike-outs on Saturday, May 3rd, as each had a pitching stint in their
respective leagues on that day. ( Ryan's strike-out total was actually
8 "K"'s, not the 5 that were erroneous reported by "The Scoop"),
while his dad had 5 and Colin had 6. The Driscoll arms were blazing!

Sammie, meanwhile, has only 2 hits during her last 12 plate
appearances , covering (4) games, which include a win, 2 losses, and
a tie for the Thunder '97.

The C-Man, however, is rolling along, and is a leader on his team,
the Blue Jays. On Sunday, and again on Tuesday, May 7th, Colin went
3 for 4, which included a booming 2-run triple in the first game, and
2 doubles in the Tuesday game.
Both games were Jay victories, 15 - 4 over the Langley Braves on
Sunday, and 12 - 6 over the Orioles on Tuesday. In Sunday's
slugfest, Colin had lots of offensive support. Carson (Curly) also
had 3 hits, while Nathan, Darius, Tyler and Zac all chipped
in with 2 hits apiece. Zac's hits resulted in a team highs 4 RBI's.

Then, on Saturday, May 11, a select squad drawn from several
W.R.teams played in a tournament held in Langley. They won their
opener VS. Hastings, 11 - 1, as Cole, Colin and Kendall combined to
hold the opposition to only 1 run on 2 hits. Ethan and Reid each had
2 hits for the W.R. entry, and Marcus Bradley had a solid single, a walk
and played superb behind the plate. Colin walked in both plate
appearances, scoring each time.

In game #2, begun at 4:30 PM, the White Rock team clobbered the
Langley Braves, 20 - 3. Colin led the way with 2 booming triples to the LF
fence, with the 2nd one coming with the bases loaded. Ethan had 3 hits,
and Kendall, Cole and Carson all chipped in with 2-hit games in addition
to Colin's 2 triples. The opposition was again held to only 2 hits, this time
by Darius, Nathan and Kai.
Unfortunately, Sunday's follow-up games were all rained out.