Bisecting the bisector, about Gerda Kruimer’s work, by Daniel Gould 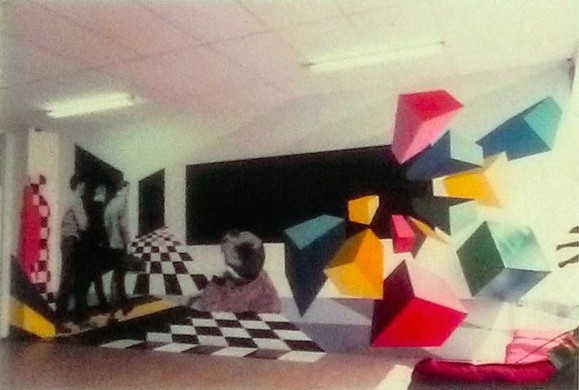 I have been attending the Eindexamenexpositie (Final exam exhibition) at the Gerrit Rietveld Academie since the early 80s. I have seen several hundreds of young artists showing their work and, generally, for the first time. Some I liked, some I left thinking “I wish them luck”. But, then, there were the exceptions. And it is this group that gets your attention. You remember what you have seen; and you remember the artist’s name.

Gerda Kruimer falls into this latter category. Her “final exam” was 1991.

There was a piece she had hanging that I wanted. It was about three meters across; a graphite and charcoal drawing. Linear would describe it best but, well, it was more than that. It had a sense of infinity in its conceptual continuity. And it was simple. Very simple. I didn’t buy it, but that’s another story. What I did was to put my address in her guest book.

Fast forward to 1995. She participated in two major shows that year. One was a group exhibition at Arti et Amecitiae, an artist club founded in 1863. The other was a small group show — three artists — at Galerie Scheper.
And there had been an evolution in her style. To describe it as dramatic would not have been an exaggeration. But what surprised me the most was how much it still was the same. The linear aspect had neither disappeared nor had it been subdued. If anything, she had added dimension to it. The large drawings (150 x 150 cms) all looked the same, but, at the same time, each was totally different. Neat trick. But she had found her voice. And it is unique.

The fundamentals of her style relate to Piet Mondrian’s late stage, the New York period, “Broadway Boogie Woogie”, “Victory”, and so on. Kruimer emulates his grid like structures. But she breakes with the master by relying on black and white and shades of gray. And she appears to be fascinated by city maps and their linear and structural forms. Straight lines bisecting and an endless variety of other straight lines some going off at weird angles. But straight lines are not natures ways of doing things. Man creates the straight line. After all, that is the way it should be since the shortest distance between two points is the straight line. And there is an infinite variety of ways to express it. Perhaps that’s what she is striving for: The shortest distance for her ongoing quest seeking discovery into the nature of things.

She has now taken the quest to a new level. At a recent show, at Galerie Clement (Amsterdam), she showed, with her drawings and paintings, construction pieces. She used chicken wire type metal material which is easily folded into forms. In addition, she is now making linear constructions from wood which are four dimensional representations of her drawings and paintings. It all seems so natural that her original style should have lead to this present state, but it has taken over 15 years; so I guess it was never a natural conclusion. But it is in keeping with her approach to her art: evolution. Her work takes her where it takes her! It might take a while, but, we, the viewer, have the thrill of watching it happen.

Kruimer has an ironic side too. At the edge of the city, of Amsterdam, there is a mayor traffic circle. Adjacent to it is a 20+ story building with an end that captures the attention of the drivers of the stream of cars navigating it. There is something dramatic to the ends face. There are three individual and dominating grid patterns that defines it. Each is arranged vertically from bottom to top. One is checkered board with about 500 squares. Another grid is unusual because it is neither divided into squares nor rectangles; but something in between. Finally, the third grid is a collection of a variety of rectangular forms aligned consecutively. It is on this grid pattern that she has attached perhaps 250 metal discs at a seemingly random configuration. Discs? Circles? This is a form that she generally avoids. However, a sustained inspection reveals a linear pattern to the way the discs emanate from their base.

This circular/linear bisection of the rectangular face reins in the chaotic sense of randomness that the discs, at first, imply. The overall result, to the buildings wall face, is that there are about 10 elementary — or perceived — grid patterns at work. It should be a busy piece, and it is… and it isn’t. Your eyes flirt across the building’s end wall like over a lily pad pond painting by Monet. But, like with one of his paintings, all the elements come together into a balanced and pleasing composition. The result is monumental and mesmerizing.

A few years ago, a personal matter turned Kruimer’s attention to a discipline she was not familiar with: Science; and, specifically, genetics. Through her reading, she discovered that this unseen – to the naked eye – sub-level of all living things, is a complex structure of crystal like forms. She says, “It is an invisible world, this minuscule segment of life, that I’m now trying to make apparent”. It is also a natural progression to her ongoing quest into the nature of things; and that’s what art is all about!