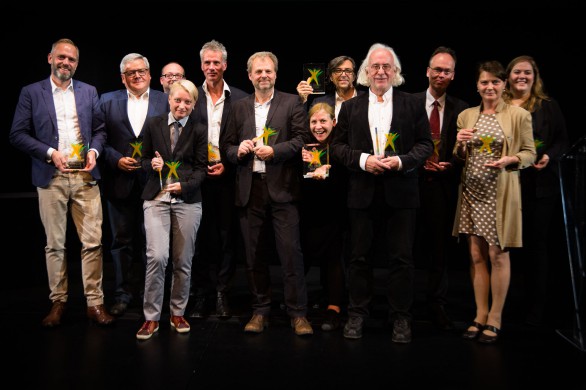 “Festivals have been working across borders and cultures since the dawn of festivals, before Europe was a project of unity, before Europe was a space that aimed to facilitatecross-border exchanges. In particular in these times of global challenges and changes, EFA can offer a community of friendship, trust, solidarity and learning through its ever expending network of established and emerging festivals as well as cultural organizations collaborates across borders and arts disciplines,” says Darko Briek, President EFA, at the General Assembly of the European Festival Association (EFA) took place in Ostrava, Czech Republic, June 2015.

The European Festivals Association is the umbrella organization for festivals across Europe and beyond. The oldest cultural network in Europe was founded in Geneva in 1952, as a joint initiative of conductor Igor Markevitch and philosopher Denis de Rougemont.Since its foundation, the Association has grown from 15 festivals into a dynamic network with European and non-European-festivals as member, representing more than 100 music, dance, theatre and multidisciplinary festivals, national associations and cultural organizations from 40 countries.

Those who started European political integration and those who were staging festivals in the 1950s all shared the same belief - that the only way to avoid a recurrence of war and heal its scars was to work together. In 1948, Denis de Rougemont (1960-1985), the first President of the European Festival Association, wrote: “ What remains unique to Europe’s its culture: a measure of mankind, a principle of permanent self-criticism, a certain human balance resulting from countless tensions.” Salted after the Second World War, EFA experienced the Iron Curtain, Portugal’s revolution of 1974, the Baltics after the Wall, the Balkan War, upheavals in Asia, the Arab Spring and the quest for peace and freedom in Africa.

Gavin Henderson, Principal at the Central School of Speech and Drama at the University of London, recalls the days when he was the Artistic Director of the Brighton  Festival:

“ At the Istanbul Assembly in 1989 Frans de Ruiter was elected as President of EFA  (until 2004).It was a prelude to radical changes that would sweep across Europe in ensuing years. I was happy to become Vice-President at the time. The Association was still relatively small, including a total of some 50 festivals, and shaped like an exclusive club that did little for its members- compared with today’s operation. In those days EFA served as a conduit and bridge for dialogue and collaboration between eastern and western Europe. The Communist bock was proud of its cultural achievements and used the traditional arts as propaganda - more progressive works were usually banned or censored. The Association was an established body that generated trust and respect; it was also a foil and subterfuge for some of us to meet and connect with dissident artists. Vaclav Havel was perhaps the best known of these; he was arrested at a meeting in the cellar bar of the Europe Hotel in Prague- he called out ‘Don’t worry, this happens all the time, I’ll be out in three days, when you’ve all gone home.’ ”Six months later Vaclav Havel was the Czech Republic President.

“The Czech experience was echoed elsewhere. Shakespeare’s work was used in Romania as a metaphor for the country’s plight. The Ceausescu regime could do little to forbid these performances, and when it was finally toppled it was an actor, Ion Caramitru who ‘led the charge’. Suddenly Romanian theatre was taken part in many festivals.”

EFA shows solidarity with countries in difficult situations. In 1993, EFA led a movement in defense of the Dubrovnik Festival that was suffering during the war in the Balkans. EFA stood shoulder to shoulder with its members in Dubrovnik (where the festival offices were fire-bombed), inviting Sarajevo to join the organisation.

“The area that was former Yugoslavia has found new energy to defend the arts and culture after the horrors of war” says Biljana Zdravkovic, Executive Director of the Belgrade Festival and President of the Serbian Festivals association. In difficult economic times culture must be defended more fiercely than ever. Culture was the first to establish new paths of cooperation between countries that had been torn apart in a conflict only a couple of years earlier.

"This is a time when EFA more than ever can help artists to travel, meet and feel they are not alone", says Nora Joumblatt, President of the Beiteddine Festival. “In profiting from the dynamics of the Arab Spring and recognizing cultural diversity, in promoting intercultural dialogue and engaging in cross-cultural exchange and in helping artists travel whose work reflects the new Arab awakening, in opening doors to their new art forms and ensuring platforms for their creations, EFA can celebrate the arts, transform people and imagine the world”, says Nora Joumblatt, President of the Beiteddine Festival. “Through its neighborhood policy, Europe can take the lead in encouraging cultural dialogue and collaboration. Increased mutual understanding will ensure the flow of ideas, reinforcing Arab civil society in the field of human rights, culture and gender equality.”

“A generation of Europeans born in the 1970s has greatly benefited from European integration and has a responsibility to read its values” says Kathrin Deventer, Secretary General EFA. “How can Generation Europe - which so greatly benefited from Europe’s legacy and assets - remain true to de Rougemont’s vision of a democratic space based on principles of freedom and diverse cultural expression? Europe in 2016 is unrecognizable from Europe after World War Two, when festivals offered an artistic answer to so much destruction. Europe can only justify its existence if its citizens want it. Only by raising awareness of cultural and human values, can Europe make it attractive for its citizens to be actively involved and feel that they are themselves players."

"EFA’S work is to lobby Europe via culture. We believe we can have a Europe of Europeans, rather than just institutions and regulations, and that to do this we need European culture. If we want to create Europe from the bottom up, we need to understand citizenship, and we need to encourage citizens to participate.”

“Thanks to the strong support of its members EFA is able to continue and further develop its international cooperation projects. With all of its initiatives EFA brings festivals together to inspire one another, fosters an exchange of knowledge, helps festivals to speak with one strong voice to shape policy developments. Increases networking opportunities, and keeps festivals informed about issues at stake in the festival and cultural world, all under the flag of artistic excellence and internationalization.”