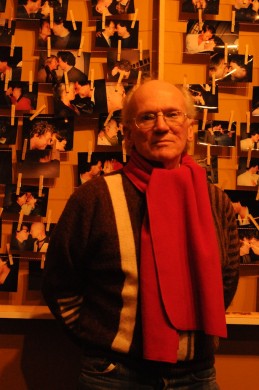 The last week has been a quiet one for the Amsterdam Art Scene. However, there is an explanation. Amsterdam Fashion Week was in full swing and many city galleries were gearing up for Art Rotterdam. But there were good shows and 3D was there to record what he saw. Remember, there is NEVER a disappointing week for art in this great city. And that's the truth! You can quote me!

Bits & Pieces:
What You Missed Last Week:
What Is Happening This Week:

The 31st of January was the closing date for the elaborate exhibition at the Hermitage Amsterdam. The theme was the Russian Court in the 19th century. It attracted a remarkable 705,000 visitors. The museum will be closed for the month of February as the curators move out the show and prepare for the next which will open at the beginning of March. More later...
***
"DUTCH ART NOW" opens at the National Arts Club (New York) on the 2nd March and continues until the 14th of March. "...An art show with a small but carefully chosen selection of art from renowned and upcoming contemporary Dutch artists." Unfortunately there was not a list of the artists---that will be featured in the show---included with the press announcement. Maybe you can find THAT insignificant info at: www.dutchartnow.com. This is an initiative of the Amsterdam based Fair Foundation.
***
J.D Salinger, the author of "The Catcher and the Rye," which chronicled the angst of Holden Caulfield, a teenager in search of himself, died last week. Much has been written about this man who only wrote one novel, but its impact was and still is so great, on young people, that it will live as long as Anne Frank's Diary. I say he wrote only one novel because the second book, Franny and Zooey (1955) is not much more than a novella. 3D will pay homage to him, as a writer, by quoting his introduction/dedication to the latter title: "As nearly as possible in the spirit of Matthew Salinger, age one, urging a luncheon companion to accept a cool lima bean, I urge my editor, mentor and (heaven help him) my closest friend, William Shawn, genius domus of "The New Yorker," lover of the long shot, protector of the unprolific, defender of the hopelessly flamboyant, most unreasonably modest of born great artist-editors, to accept this pretty skimpy-looking book."
***
...And speaking of outstanding Americans, 3D found this quotation credited to Ansel Adams, the exceptional turn of the last century photographer. "The terms shoot and take are not accidental; they represent an attitude of conquest and appropriation. Only when the photographer grows into perception and creative impulse does the term make define a condition of empathy between the external and the internal events. Stieglitz told me, 'When I make a photograph, I make love!'"
***
Leo F., a Dutch artist, now in Brazil, sent this ALMOST X-rated video. If it wasn't so well conceived and presented 3D wouldn't have taken the time and effort to list the address which is:
http://sorisomail.com/email/12428/strip-duma-mulheraca-mesmo-boa-vale-a-... Whew...
***
Three 3D list readers sent the "Husband of the Year Awards." Six funny and poignant photos which say it all. There was no web-site given so 3D Googled and found it at:
www.thatwasfunny.com/husband-of-the-year-awards/1492. In the copies sent to me there was something added which is not at the web-site. To wit: "Ever notice how all of women's problems start with MEN? MENtal illness; MENstrual cramps; MENtalbreakdown; MENopause; GUYnecologist; AND...When we [females] have REAL trouble, it's a HISterectomy...Send this to all the women you know to brighten their day. Send it to all the men just to annoy them." Of course this is a wonderful example of ethnic smearing since it refers only to American, Irish, English, Australian and New Zealand men. 3D condemns this racial slurring and demands a recount! Oh, yeah, the site has had 25,000,000 hits. 3D assumes that means it has hit a nerve.
***

WHAT YOU MISSED LAST WEEK:

At Steendrukkerij Amsterdam (Lauriergracht 80) there was a special exhibition. The concept and realization credits go to Christian Bunyan of the KesselsKramer advertising agency. He had been inspired by a large work of art from the year 1066 called the Bayeux Tapestry. He contacted several Amsterdam artists as well as the Sheridan College Institute of Technology and Advanced Learning in Toronto (Canada). Well, that's the essence of what the original invite said, but the "tapestry" that 3D was expecting was not the tapestry he got. First of all, unlike classical types, this one was only in black and white; all 21 meters of it. Nor was it weaved. The style was what 3D would describe as "contemporary young." That is, nearly all the 52 individual drawings were either comic strip style or street-art/graffiti.

Each artist was given a specific week, a few had more than one. They then illustrated the event of that week that stood out to them. Obama dominated the subject matter with six representations and, interestingly enough, second was Colonel Qaddafi with two. The pope got one along with Madonna and Michael Jackson. These drawings were laser copied onto a synthetic canvas-like material and bound together into a continuous scroll. The show closed on the 2nd of February. Check this web-site for more info: https://bit.ly/2Lnoq2R
***

Jakup Ferri (Kosovo) is at Van Zijll Langhout Exposities (Brouwersgracht 161) with quirky figurative comic strip like drawings. What makes them really different is that nearly all border on the conceptual. Probably what you might expect from an illustrator who then attended the Rijksakademie. There is an elegance to the simplicity of these endearing illustrations. They would work beautifully as book illustrations for a volume directed at both children and adults. Most are about seven by ten centimeters. Nice work. (350 euro each.) Until 10th March. https://bit.ly/2m7l7Sk
***
Lam de Wolf is back at "galerie ra" for the 28th time! That must be some kind of record. The work showing here is both new and relates directly to what she has been doing for the last 30 plus years. What is the same is her use of material/fabric. But she has reinvented the way she uses it over the years. The last few shows she has made large pieces of about 200x120 cms+. Also, the same, is that she fashions a grid. The grid is her "canvas" and she embellishes it with material in several ways: clumps and weaved. Along the gallery's window ledge there are bout 50 balls made of several different materials in a variety of colors. She requested of several people that they ask a question. She has "answered" each question and wrapped it into the ball. After the close of the exhibition each person will be given their ball. (200x120 cms., mixed media @ 4,000; 200x200 cms., mixed media @ 5,000 euro.) The show was also an occasion for a book presentation: "Lam de Wolf, monumentaal en dischtbij" ("monumental and close by"). It is an overview of her work from 1979 to 2009 and includes of CD of video clips. (45 euro.) Until March 10th. https://bit.ly/2mkg3u7
***
VERVERS modern art gallery (Hazenstraat 54) hangs the work of Branislav Mihajlovic and they are exceptional oil paintings. His ability with the use of light is exemplary. There is even an Edward Hopper element to these rather mundane subjects: an airport waiting room; hallways or ornate rooms. A few are what you might describe as motion paintings; while, other work, and from a distance, look nearly hyper-realistic. However once you get your nose up to the canvas you see that the brush strokes are bold and sometimes elements of the form have only been sketched in with pencil. (40x50 cms., @ 600 euro; 100x50 cms., @ 1,300 euro; 82x112 @ 2,100 euro.) Until 13th March. https://bit.ly/2mkqkqc
***
Mark van Praagh is showing at Galerie Strous (Prinsengracht 540). He paints architectural cityscapes with a representational abstractions. There is a subdued color abstraction as well. (40x50 cms., oil @ 1,500 euro; 50x60 cms., oil @ 1,500.) Until 28th March. https://bit.ly/2Js9Ghn
***
At the artists' club, Kring, (Kleine Gartmanplantsoen 7), is the work of Martijn Last who is showing conceptual constructions. No better way to describe it. The formulation of these large square boxes (150x150 cms.) consists of linear abstraction and geometric rectangles arranged in a conceptual way. One box is a collection of photos. It appears that he had himself photographed with a variety of people at various openings over a period of time and has grouped all the photos into one composition. Hmmm...3D wasn't among them. Is he trying to tell me something? No price list available. Until March 8th. www.kring.nl
***

It snowed again Saturday night and 3D stayed in ALL day Sunday. Tsk-tsk! Must be getting lazy.
***

WHAT IS HAPPENING THIS WEEK:

Reminder: Yes, we MUST go through this once again unless you already know. The (?) indicates that the info could be incorrect. The "*" means, simply, the times could be wrong even if the date isn't. You are advised to check the gallery's web-site or phone ahead.

20:30 Mediamatic BANK (Vijzelstraat 68). "New Bardot Proviant Klub Events: Performance, cooking, kaffemik[?] and slipper workshop." A performance by Melanie Bonajo and Joseph Marzola and a lecture by Dr. Louwrens Hacquelord about native cultures in a changing coastal area." Gain, it's ALL about Greeenland. https://bit.ly/2utrbcI

17:30 AvK Expositie/De Nieuwe Galerie (A.J. Ernststraat 665). Mall Klein...3D has no idea what the technique is though I checked: https://bit.ly/2zMWqV5. But I did note that this gallery offers Saturday workshops in painting and glass work for children from 14-16:00 at a cost of 15 euro.

18:30-21:30 CARHARTT STORE AMSTERDAM (Hartenstraat 18). An exposition with images from the book "All City Writers," edited by Andrea Caputo with a reading by him. "The volume tries to document the evolution...of a counter cultural phenomenon that provoked a change in the aesthetics and rules of communication of modern day society." https://bit.ly/2Js6Ngx

16-18:00 Willem Kerseboom Gallery (Leidsegracht 38), "'Light Breaks Where No Sun Shines,' a solo exhibition by the urban contemporary artist, Motel7 [sic] (Irish/Norwegian, born and raised in S. Africa)...One of the few female artist involved in the predominantly male graffiti scene, where her alias 'Motel7' has its origins." The gallery "will be transformed into one of Motel7's fantasy worlds." https://bit.ly/2zLE86v

17:00 "BORZO modern & contemporary art" (Keizersgracht 516). Michael Ryan´s "Out of the Blue," flower paintings, but not ordinary flower paintings. No, no, not at all. https://bit.ly/2maQxaC

13:00 Mediamatic BANK (See Saturday, same program, starts one hour earlier). However, in addition to the cooking lessons, A.S. Hardenberg will talk about her new book. Also Sunera Buijs gives a talk on the ins and outs of Greenland clothing and Tekke Terpstra interviews Ole Korneliussen who is a Greenland film maker and story teller. https://bit.ly/2LhG23q

No excuses for NOT doing everything this weekend since there isn't that much to do; and it's "springtime in the city..." almost, therefore it will be easy going. 3D took a group of teenagers on a gallery tour this week. At the first gallery, I noticed two green dots. I explained that that meant two people were checking their bank accounts and counting their money in the hopes that they might be able to afford the work. At the next gallery, Galerie Clement, I was pleased to count eight red dots. The show opened only ten days before. I then noted that one young lady had spotted a price list and was surrounded by four other ladies. The one holding it said that the prices were from 550 to 2,200 euro. They were impressed with the red dots. Hey, that's what the art economy needs NOW: RED DOTS. Do your part! Do it NOW! But DO it! Or something like that.

Photo:
3D was left out of the montage of photographs you see behind him...So, he did something about it and put himself into the middle of things...Once again, Taken at the artists' club, KRING, at the opening for Martijn Last, Photograph by: Michael Levkoff