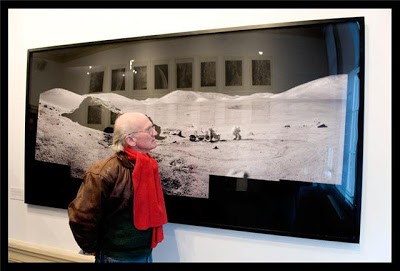 Put the blame on the Openbare Bibliotheek near Central Station.

Since September, 2007, the third floor of the new library has been my "office." When I make appointments, I tell the person anytime between 12 and 18:00, Monday through Thursday, you can find me there. And sometimes I am still there when it comes time for lights out at 22:00.

The choice of the third floor was for convenience. That's where the dictionaries are located. I can't spell. Often the word processor's "check spelling" can't determine what word I am trying to use. But more on that later. It is relevant.

I take medication daily. One of the little white pills is a diuretic. When it kicks in, I need to urinate every 15 or 20 minutes for three to five hours. The library has two open toilets. One on the 7th floor and one in the basement. You pay 20 euro cents for access. But each floor has a toilet for the disabled. When I began using the new library, I explained my problem to one of the floor librarians---there are perhaps ten or more librarians that serve each floor daily and weekly; it is a revolving system. She said, "Oh, my mother took the same pill." She gave me the key to the toilet for the disabled. The other librarians did the same.

Fast forward to last spring. One librarian began to show exasperation when I would ask. She would say something to me in Dutch and I would ask her to speak English since I neither speak nor understand Dutch (that problem will be discussed further in Part 2 of this discourse. It too is relevant.). Finally, at the beginning of July, as I was composing the last 3D List, of the 2009-2010 art season, she refused me the key. She called her supervisor and talked to her in Dutch and then handed the phone to me. The supervisor began to explain that there were special cleaners for the disabled toilets and the more people that used them the greater the work load. I replied that I had had only one complaint in the two years I had been using the toilet and that was from a floor librarian who said, "You always leave the toilet seat up." It didn't happen again. The supervisor finally said, "I will need to see a letter from your doctor." Two days later she had it.

I took a holiday from the library during July and August. When I began doing the list once again, I asked for the key and it was given to me. Even the lady, who had called her supervisor, did so, though reluctantly---and with a frozen smile. Then three weeks ago, another supervisor came up to me as I was working at the PC and said she wanted to talk to me. She said that the problem with my being allowed to use the third floor toilet was that the librarians left the key out for me---this was true---and they were not allowed to do this. Often the floor librarian is working the stacks or somewhere else so they accommodated my need by leaving the key partially hidden on the service desk. The supervisor told me that I could use the one one the fourth floor since that toilet was left open when the "radio studio" was in use. She rattled off the days and times that it would be available.

Well, the first week went without incident. In fact, even when the radio studio wasn't being used the same librarians that service the third floor gave me the key. Then, two weeks ago, the same supervisor appeared again at the PC, I was using, and said she wanted to talk to me. She lead me off to where two security people where standing. That took me by shock. I asked what they were doing there? I was told it didn't matter. She proceeded to say she understood that I was using the toilet on the fourth floor during hours when the radio programming wasn't scheduled. I told her that neither my bladder nor the medication, I took, adhered to any other schedule but their own.

I was told that they had a "solution" to my problem. I could use the toilets on the 7th floor and in the basement FREE. I said that that was not a solution. I added that while the 20 cents was a consideration---think of making use of the facility 10 or more times a day, four days a week---but that the main problem was the time it would take me to reach either of the toilets. In my present physical condition, when nature calls it screams. Waiting for the elevator can take from a minute or two to five minutes or more. But when you gotta go, you gotta go. I said that their plan was unacceptable. I was told to accept their solution or I would be physically put out of the library. I replied that this was discrimination.

Oh, yeah, one of the security men said, "The disable toilets are only for people in wheelchairs!" What, no blind person is allowed? I am reminded of "The Seven Commandments" for animals, in George Orwell's "Animal Farm." One of the commandments reads, after first being posted, "No animal shall sleep in a bed." Later, in the book, some of the animals noted that the pigs, who had taken over the farm house, were now sleeping on beds. When they checked the commandments again, they saw this, "No animal shall sleep in a bed with sheets."

Four month ago, I asked for a letter from my doctor attesting to my disability. Now, the meaning of the term "disabled" has been amended.

Last week, I composed the list at three different locations. One of them was the Amsterdam's Stadsarchief. Unfortunately, it closes at 17:00 hours. That I could adjust to. But when I showed up, at their door, on Monday---my main writing day---I discovered that it was closed on Mondays. I tried the University of Amsterdam library but was told that I could not use their PCs nor Internet connections without a student or faculty ID. I then decided to hell with it! No one pays me for what I do, so why bother.

Of course, there are those who have offered their appreciation for my support of art and artists exhibiting in Amsterdam. But, hey, who are they? And the government is cutting monies for the support of cultural activities so obviously they think that art has little importance in the overall scheme of things.

The powers-that-be are no longer acknowledging that art is the soul of a society. But without soul,can there be a society?
***

This is part one. Part two will discuss how Tolerance---that has been one of the great attributes of the Dutch society---is now on the line. And not always in obvious ways.

Photo: "Fly me to the moon and let me play amongst the craters and wonder what spring is like on Jupiter and Mars..." 3D contemplating a voyage and wondering, "if I can go first class?", Photograph by: Piet van der Meer