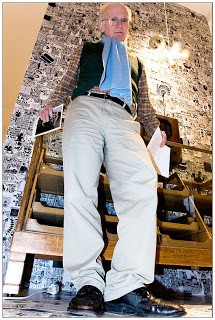 I appreciate the response to the piece on DISCRIMINATION posted on last week's list. There have been suggestions too. Here are two of the best: Send a short message to Hans van Velzen, the director of Openbare Bibliotheek Amsterdam (OBA). You can address it: dir@oba.nl and a copy, of that same message, can be sent to one or more newspapers.

So, the 3D List remains on hold. I am looking for a work space/atelier (I also make drawings, objects and collages) with an Internet connection. Should you know of one, let me know at: danielrgould@hotmail.com

This week you will read an introduction to an article concerning Dutch TOLERANCE.
***

TOLERANCE on the line in the Netherlands: Part 2

Bonnie, my first love---we were a thing from the age of two until six at which time my parents moved to another city---acted as my interpreter when I spoke to an adult.

My mother would introduce me to people---as I was growing up---by saying, "Until he was four years old, no one could understand him. Once they did---and he had their attention---he's never stopped talking."

My father was fluent in two languages. He often bragged that his father had spoken seven. My father had married outside his ethnic community so when there were family get-together, on his side of the family, the spoken language was Germany or as he described it, "low German" or "bloody German." My mother complained that she was left alone during conversations. But I was curious, especially when everyone one laughed until tears rolled down their cheeks.

At eleven years old, I asked my father to teach me. After a few months, he gave up saying, "Ah, kid, you're too dumb to learn."

I went to a Catholic school and classes began each day with the Mass. I decided it would be cool to be an altar boy and "speak" Latin. The nun, in charge, gave me a two sided card and told me to memorize what was on it. I couldn't.

My mother was encouraging me to go to college even though my father was a machinist in a Detroit factory. She wanted that I achieve the American dream.

My high school education was the same Catholic school I had attended from grade one. The only "foreign language" offered was Latin.

A report card was issued four times a year. The first grading for Latin had me with an "A" (10 on the Dutch system); the second listed a "B;" the third, a "C:" and the last, a "D" (a 3 or 4). I successfully fulfilled the required two years, however, since the final exam, in year two, was on the Gallic Wars; and the questions were in English and we could answer in English. Whew!

At university, there was also a language requirement for graduation. I signed up for German; after all it was in my genes; or so I thought. I flunked it. I also flunked out of the school. I had had another "F" and that was in English. I called, Dr. Montesi, my English professor, to ask him why he had given me a failing grade? "Because, Gould, you deserved it...And you'll thank me one day." I explained that that wasn't going to happen since I had been told I could not register for the next semester. He asked me "Did you flunk anything else?" I replied, "German." He paused and then said, "Go tomorrow and ask for Father Hastings [it was a Jesuit university]. He's the dean of your college. Tell him to call me." I did. It worked. I was back in.

I switched to Spanish. Everyone said it was easy. Wrong. Flunked again. However, I persevered. I would satisfy my language requirement by passing only by the skin of my teeth and by luck. But that's another story. A funny one too. And Fr Hastings played a role in that too though he would never be aware of it.

I made it into graduate school when the same Fr Hastings invited me to join a new graduate program he was setting up: American Studies. It was a three year PhD program. Now I was really concerned about the language requirement. You were required to be proficient in another language. A year into the program, Fr Hastings asked if I had selected a dissertation topic. I replied, "the American Gypsy." It pleased him and he said, "You will probably have to learn Roma, the Gypsy language." I was actually thrilled because there were no formal courses for the language. It would be a one-on-one learning experience.

But it never happened. I had married at the beginning of graduate school and when my then wife became pregnant for the second time it meant getting a job.

Flash forward six or seven years. I was working for a scientific publisher of books and journals. I was offered a promotion to European Sales and Marketing Manager. Of all European countries, Germany accounted for the largest percentage of sales. But for tax reasons, we would warehouse our publications in the Netherlands and I would live in Amsterdam.

Not wanting to be perceived as an "Ugly American" (the title of a revealing book I had read) I insisted that the company pay for an intensive language program, for me, in German. For five hours per day, six days a week and for six five weeks I listened to tapes and worked with an instructor. At completion, I was sitting in the office of my boss when a German speaking co-worker walked in. My boss said, "Say something to Eleanor in German." I turned to her and said, in German, "What time is it?" she replied, "10:30 in the morning." My boss said, "What did you ask her?" I repeated the question in English. He looked at me and said, "We paid $5,000 so you could ask what time it is? A Rolex would have been cheaper." (This was 1972.)

I was thrilled to be coming to Holland. At last, I would be living in a completely different linguistic environment. The first weekend, I was in Amsterdam, I found myself at a disco, off the Leidseplein. I would approached a pretty Dutch lady an ask, in German, "Sie gern tanzen?" A puzzled look would appear on her face and she would reply, "Do you speak English?

I would be here for three years. During the last one, I was living with a Dutch lady who decided to teach me the language. She prepared 3x5 inch index cards with simple verb conjugations and phrases and, in addition, for two hours a day, she would only talk to me in Dutch and not acknowledge any understanding to my English. Nice try, but it didn't take.

I returned to the States. Five years later, I came back to Holland and with three American teenagers. Their mother had sent them to live with me. I entered all of us into Dutch language lessons. I could continue my own personal study of the language for another three or four years: classroom and small group lessons; tapes and even a tutor. Nothing worked.

I came to the realization that I had a problem. It was then that I began to try to define what it was. Hey, my father spoke two languages and my grandfather seven. Then I recalled that my father had mentioned, a few times, that his mother had lived in the States for seventeen years, before she died, and never learned English. Aha, I had her genes. Damn! It was at this time that I recalled the anecdotes that I related at the beginning of this essay. Ironically, people often comment to me that "You have an incredible memory!" Yes, I do! But, for language? I was now telling people it was like there was a transistor missing in my brain.

Sometime during the late 90s, I read an article, in the International Herald Tribune, that described something called "dyslexic of sound." It said, that about 4% of Americans were incapable of learning another language. Studies were only just beginning to try an understand the phenomenon. It said you could see in already in a child at three and four because they would say "titty-tat" for "kitty-cat."

About 2005, a Dutch friend who knew of my problem, told me about a neuro-linguistic lecture coming up at the University of Amsterdam. I attended and listened as a neuro-anatomist, who specialized in language, explain how using MRI she was mapping the brain and identifying areas and lobes and what they were responsible for. She gave several case histories of people unable to learn another language; and she said it was a real physical disability. "They are not dumb people. Some are very intelligent..." and she went on to describe an American professor who had been diagnosed, at seven, as "mentally impaired." She said that "He still sends me professional papers to copy edit for him." She explained that, with these people, there appears to be a stem missing from the lobe which is responsible for language.

At the end of the lecture, I went up to her and said, "Some of those case history could have been mine." Her immediate response was, "Can you spell?" I said, "No! Not at all...But I write professionally." Her retort was, "Impossible!" I countered with the fact that I had gone to a very good university and "there was this Dr. Montesi..." I asked if there was anyone doing a study in the Netherlands, on the problem, and she said "No, but if you ever find yourself in Miami, look me up. I would like to map your brain." I also asked if there were any methods and/or tricks that could help me learn another language? "None that we know of."

A few years ago, I was talking to a Dutch person who was interested in language and people with problems dealing with the discipline. I told her I had this disability called "dyslexic of sound." She said, "I know!" I was taken by surprise and asked her how she knew? She replied, "You mispronounce 'dyslexic.'" There are several English words that I mispronounce and even now I must pause in a sentence when I am coming to one to think how to say it: "renumeration or remuneration;" "expotential or exponential." When I am writing, I get confused with were/where; then/than; red/read; hear/here; and so on. Simple words. A friend, from my university days, married a woman named Virginia. Bob, called her by the diminutive form and so did I. One day, Bob said in exasperation, "Dammit! Her name is 'Ginny' not 'Jenny.'" From then on, when I wanted to use her name, I thought of the English alcohol drink, "gin." Problem solved. I can't hear sounds. I can't remember sounds. I love to sing, but no one likes to hear me.

Why this extended discussion on a language disability? What is its significance to "Intolerance in the Netherlands?" Well, that's for next week and Part 3 of this series of essays. And don't be surprised if Geert de Wilders name pops up.

Photo: 3D checking out the floor of  "moooi - gallery" that is one very large organic collage. Organic because it continues to change. Cool!, Photo by: Piet van der Meer