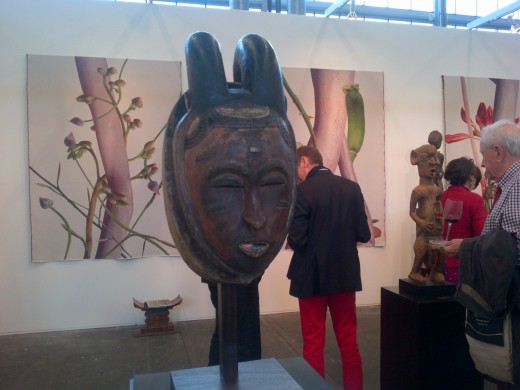 Once again the Netherlands is in recession. Austerity has done its cruel trick. The first half of this year has had fewer openings than previous years. RED DOTS are few and far in between. What can be done? 3D has already suggested a new government, but the last time that was tried (September 2012) we got nearly the same old, same old all over again. If you analyze that it means the people have got what they want. Why they find the situation and status quo appealing is beyond me.

But the "good" news is that prices are down so it is now a perfect time to buy. So show some hair and give the finger to all the grim economic news and contribute to an artist---and their families---welfare, Not only will you have a life-long aesthetic commodity to admire, but you will feel better about yourself. Kid you not!

What You Have Missed:

...And more on the effects of austerity..."The number of traffic jams in the Netherlands fell by 26% over the first three months of the year...'There's always a sharp correlation between the economic conditions and traffic jams.' Inrix [a traffic info firm] director Bryan Mistele said in a statement. 'Jams show you if people are commuting to work, going out to eat and shopping.'  www.DutchNews.com, 24th April. Well, there's that.

...And there may be a light at the end of the tunnel. "Europe Commission leaders now think that austerity has been misunderstood. Jose Manuel Barose, who heads the European Union's executive body, and economics affairs commissioner, Olli Rehn, say it's time to relax the rigid fiscal discipline they have advocated for members of the Euro zone for the last three years. But the harm has already been done."  He got that right! It is like closing the barn doors once the horses have fled.

...Oooops...Perhaps I  spoke to soon about the light at the end of the tunnel..."The economic turn down meant that the government collected less taxes than expected in 2012...the shortfall amounted to 11 billion euro, pushing the budget deficit up to 4.1%. This is 'directly attributable to lower growth figures,' the finance minister said. The downturn affected all forms of tax, from income tax, corporation taxes, value added tax [BTW] and the tax on house sales." Hey, told you so! I predicted that the cuts to the cultural segment has meant a lot of people out of work and needing unemployment benefits and NOT paying taxes. And guess what..."The European commissioner Olli Rehn told a news conference that the current deficit is due to the nationalisation of financial services group SNS Real and 'economic conditions which are more serious than expected. That leads to changes in the recommendations; the deficit should be reduced to under 3%,' Rehn said. This means further cuts will be inevitable commentators said." I'm confused. Is Rehn contradicting himself?  www.DutchNews.nl

Restaurants and cafes are laying off staff and the unemploymnet rate for horeca has sky-rocketed. And, in the USofA, last year's deficit was half of previous years and that is directly atributable to rising employment; more people paying taxes; and less unemploymnet cost.

Here is a good article concerning the issue: "Austerity's reign may be near end," by Andrew Higgins (www.iht.com, 27/28th April, 2013)...And, yet, another: "The one percent solution," Paul Krugman says, in part, that "austerity has not worked, only made things worse." That's my boy! (www.iht.com, 27/28th April, 2013). He got that right!
***
Not sure what this is all about but the brochure is a very nice layout and it appears to be all about: ART. See: www.aimatart.nl
***
Brancusi said, "Create like a god, command like a king and work like a slave"...Kokoschka said that producing art was "a man's timid attempt to repeat the miracle that the simplest peasant girl is capable of at any time, that of magically producing, life out of nothing."  These quotes are from BORZOnieuws, #31, April 13th 2013.
***

The 29th edition of KunstRai has opened and will continue until Monday the 20th of May.

Well, there is good news and bad news...Always best to begin on a positive note, therefore good news first.

...And the good news is that there is a lot of good art to see. And considering the smallness of the fair, only 60 galleries showing, the mix could not be more eclectic. Everything from representational to conceptual with abstract, expressionism, objects of art, sculpture, video, photography and, well, just everything you can imagine and some things that you can't, in between.

Because 3D has a deadline---so that you have an opportunity to read these comments and still see the fair---I am not going to discuss individual artist nor galleries. You will see favorite artist who have been showing for years like Armando or Henneman as well as young artist exhibiting at an art fair for the first time. And there are surprising things to see. Studio Job Gallery shows objects of art that are large, gaudy and spectacular, all at the same time; Galerie Clement has a b/w theme; and "gallery 9" has about ten booths with an incredible range of geometric/abstract art in several styles and forms.

Of the galleries showing, eight are designated as being "Raw Edge." Each of them were given half spaces, at a reduced rental fee, so as to allow them the opportunity to reach a larger audience. A few like the Mini-galerie, which is located in the galleriest' small living room, in the center of the city, has nearly as much space as it permanent location. And these galleries present sometimes innovative concepts like Galerie Vriend van Bavink which is currently participating in a rather unique exhibition at their home location (scroll down for review). Note worthy, too, is that this is nearly an all Dutch fair. Only three galleries hail from other countries---USofA, Belgium and Italy.

Now for the bad news. KunstRai---like last year---is back in the dismal Hall "M."  Hey, folks, that's where they have the boat and caravan shows. Obviously, it has been down-graded by the owners of the concession, the RAI; and it seems to be permanent. Regrettably! The kitschy trees, of last year, are gone, but the uncovered black cement---and well scarred---floor stands out like a sore thumb, especially when you are looking at a very good work of art priced at 30,000 euro. Along the walk way is green carpeting that looks out-of-place. I described last year's fair as shabby. Nothing has changed. For some reason, I expect a "rich environment" for beautiful and aesthetically pleasing things and objects. And this lack of any emphasis on ambiance can also been seen at the "terraces/terras" serving food and beverages. You sit on old wooden folding chairs which are uncomfortable; and the tables are made of plywood and covered with brown wrapping paper. Ugh!

Also something else that stands-out are the galleries you won't see. The list is long. Nearly all of the Amsterdam' galleries that describe themselves as avant garde are absent. Several galleries that were at last year's fair have not returned. And one gallery that had exhibited in the 28 previous shows didn't come this year.

Austerity is raising its ugly head in a variety of ways. And it is injecting a debilitating venom into several venues of the commercial society. Hopefully, when the economy once again begins to produce revenue for the art lover, the powers that be will revert back to the good old days of Wim van Krimpen's world of art or that of ArtAmsterdam...Ah, yes, thegood ol' days! Those were the days, my friend....

If you are a reader of the National Geographic magazine or view their cable-TV station, don't miss this exhibition. The magazine was instrumental and has continued to be relevant as to covering the world and the most overlooked locations. They have gone to mountain tops and rain forest and other nearly inaccessible places.

The main show at "foam" is the work of Koos Breukel and Roy Villevaye. They visited Ti (Papua New Guinea) one of the most isolated villages in the world. Breukel is one of the Netherland's leading photographic portraitists. Villevaye, on the other hand, is a conceptual artist and has been visiting the area since 1992. The two of them recorded the images of every one of the 120 inhabitants of Ti, "The first thing you notice [in the show] is the simple fact that all the men, women and children of Ti were photographed twice, once by Breukelk and again by Villevaye."

In total, there are about 150 photographs. You sometimes forget how far the village is removed from the civilized world because you see its residents wearing iconic T-shirts and caps embossed with logos like for Pernelli. On the brighter side, there is not one Coca-Cola logo nor McDonald arch visible. Maybe they are more civilized then they have been given credit for.

There is a minor thing that will probably be overlooked. In all of the photos there is only one--- in a group photo---with someone smiling, a young boy of about 12 offers a very subdued smirk. Perhaps this fact has something to do with village customs or their state of mind?

Needless to say, the technical quality of the photographs are top notch...And you won't be able to miss the wall-size photo measuring approximately, 3.5 meters high by five meters across.

WHAT YOU HAVE MISSED...But there still may be time...

Let's start this off with a bang!