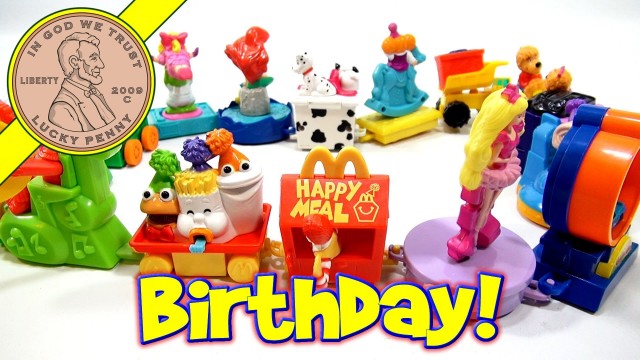 "A McDonald's Happy Meal! They say so on TV."And if it has been on TV, it must be true! Right?

But let us see what do you get with a Happy Meal: A dry tasteless slab of beef; a sugary tomato based (maybe) sauce with french fries, saturated in hard fats; sugar water (read: Coke), dessert (who knows what they make THAT from), and, a toy, which may have been produced at a sweatshop somewhere in Asia. But kids WANT a happy Meal. They may or may not leave McDonalds feeling happy though they propably do because they have the toy. And they have been conditioned to associate a Happy Meal with being happy. They saw it on TV, after all. The smiling faces of other kids always someone their age represented; parents like their own and grandparent look-alikes that they may wish were theirs. Not to mention, Ronald McDonald; and would a clown with a "happy face" misrepresent him/her self? Never. It was on the TV!

Everything today is marketed on TV, billboards and in the print media from hamburgers to lawyers all with smiling faces and good looking people lining up to buy whatever or being consulted by some "expert" on hair transplanting, plastic surgery or a cheap personal loan "... only 1 and 1/2% per month." That comes to ONLY 18% per year. But, hey who cares, it will make you HAPPY because you took this loan and bought a SUV Toyota (that in a short time you will no longer be able to use because you can't afford to buy the gasoline for it and because it will be repossesed, inside of a year, because of that 18% interest on the loan).

All of these commercials are based on subliminal conditioning.

Many are developed first by psychologists and refined by marketing experts and glamorized by the ad agency personnel. You see the Golden Arches and you feel hunger pains. You see the neon sign for a brand of beer and you think, sex, beautiful people, excitement (read sports' sponsorship), refreshment and relief for the parched throat. Never mind that it is January and 10 degrees below zero. You feel the desire. The need. You want it now. And with over 40,000 restaurant locations, around the world, MacDonald's can deliver; and with the global distribution of Heineken and Budweiser you can be in Russia, Japan or Fargo North Dakota, and have it NOW.

The advertising industry spends billions of euros, dollars and pounds every year to condition us into "knowing" that smiling people sucking on cancer sticks (cigarettes), guzzling beer, breezers and other types of booze while shampooing with the new "miracle gel" will leave us irresistible to another person. And, THAT will mean life long happiness. I experienced an incident, some years ago, at a gallery opening. I was talking with a man and woman. I had just introduced them to each other. At one point, the woman took out a package of Gauloise cigarettes. The man quickly reached into his pocket and brought his own pack of Gauloise and the look in his eye said: "We are soul mates. Meant for each other. Happiness!" I don't know if anything came of the meeting, but I do know, about three years later, I was told that the lady had died, at 36, of lung cancer. So much for life long happiness.

Of course, the conditioning for what you come to expect will bring you happiness often begins in your family home.

You heard your mother saying for the first 18 years of your life, "Your  going to go to university and become a doctor!" Forget the fact that you hate needles, the smell of alcohol and can't pronounce "pneumonia" correctly not to mention ANY word in a pharmaceutical dictionary. You WILL become a doctor.

Even at the lower end of the social class sytem parents condition their children to think in ways that they think is best, wise or authentic truth. Several years ago, in America, I overheard this short conversation. A 13 year old boy said, "I'm gonna be a plumber when I grow up!"  A 15 year old girl, that I assumed to be his sister, said, almost absentmindedly,  "That's good money!" And I assumed that that wasn't an original idea on her part but something she had overheard time and again form her parents over the dinner table.

Actually, fundamentally, this is a good way for us to raise our children. Pointing to things that may fulfill them or at least pay their bills. However, for some parents, their desires for their children are only to reach a fullfilment of their own desires: the proud mother's exclamation, "My son os a DOCTOR!" Often, both the educated and uneducated parent fail to try and define their children's skills and/or talents and encourage them to develop in those directions.

Of course, people who can be honest with themselves may end up - after spending 10 years at university and medical school training to become a doctor --- chucking it all to become an artist.

Gone is the promise of the BMW and Saab, the condominium on Maui and the new reality of using a bike for transportation and a modest house (not to mention the uncertainty of paying even the rent on the little flat). But, somehow, they find themselves satisfied in what they are doing or trying to do. I know a person, who at the age of 50, has been pursuing an artistic career for nearly 20 years after giving up his medical practice because, well, he just wasn't happy. Is he happy now? Only when he is sitting in front of his easel. The realities of surviving in the art world are both complex to his understanding and frustrating because of the lack of recognition of his work. However, he has NO intention of returning to the medical profession.

What is the lesson? Happiness is for those who make it and not those who search for it.