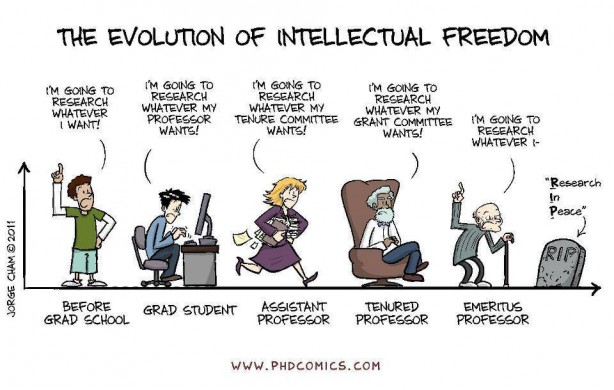 At university, I had an assignment to write a philosophy paper. The topic was: What is your definition of freedom? The day the paper was due was the same day of a big test in a Political Science course.

All things come to pass. At about three, in the wee hours of the morning, I closed the Political Theory text book and was looking forward to my bed ... I needed sleep. But, out of habit, I checked my "to do" agenda. Damn, the paper on Freedom had to be submitted in less than five hours. The class met at eight oçlock in the morning.

In a sense, it was probably from the feeling of regret that I did not have the "freedom" to say hell-with-it-all and go to bed, that inspired me to write what I did. The 300 word paper took me only about 30 minutes to compose. A quick piece, but I wanted the solace of sleep.

About two or so weeks later, I walked into the Philosophy of Man class room, for the early morning class, with my eyes still half shut. I took my seat and was handed a sheet of paper with ten items listed. Nine were short, about one sentence in length. The first one was a good paragraph long.

As I read it, I thought "This sounds familiar".

When the class began, the professor explained that the ten items were points from our papers as to the definition of freedom. We would discuss each one. I then realized that the first one was a quatation from my paper. that was exhilarating and brought me fully awake.

I was a daily contributor to the group's dialog. I enjoyed the class, if not the hour. But, on this day, I sat back and listened. It wasn't until the professor said that he didn't know if this was an original thought, on the part of the writer, that I finally spoke up and interjected myself into the discussion. I explained the circumstances of my writing it and how I felt very un-free at the time. That got a laugh from my fellow students. The discussion on my definition lasted about 40 minutes untill the professor said, "I want to get to some of the others. Let's move on."

What I had said, that was so profound and provoked such an in depth discussion, was that there is no total and/or pure form of "freedom" in a community or society. I may think I have the freedom to strike you, but I don't have the right. So, our freedoms are limited. Our laws and rules, the Magna Carta and Bills of Rights, are not freedom giving, but freedom limiting.

It would be years later that I would see a one box cartoon with a man carrying a suitcase. The caption said, "To be totally free, you must go to a deserted island alone!"

So, life is not as simple as we think it is.

There are rules and laws; some are set in stone and some are assumed. Life is the only game you play where you learn the rules as you go along. And there are more and more dictums to learn everyday. You must have a light on your bike! Spare me! I'm worried about my teeth falling out!  You can't smoke  a cigarette anywhere anymore. Hey, why is everyone pickin' on me? Don't I have any rights? See how it all gets so complicated. To allow someone the right to breathe air that is not polluted with clouds of toxic tobacco smoke impinge on your right to light up. What to do? Well, there's always that deserted island.

But you ask "What does all of this have to do with happiness?" Happiness is often associated, in our mind, with freedom. When I am free of school, teachers, homework, exams, etc., I will be happy. My high school class had 98 students. Two fellow members were told, about a month before graduation, that they would not receive diplomas. One of them, Michael, quit coming to classes. What was the point? He was free, at last, of the daily grind. Bit within ten days, as we would file from the building at 15:00, Michael would be standing outside waiting for us. His new found freedom form the drudgery of attendance no longer left him feeling happy.

When I am free from my present partner, I will be happy. But we all have known people --- or have had the experience ourselves --- who return to the same relationship again and again. I have known two ladies each of which I have had four relationships with over a several years period. In both cases, the final involvement was platonic. And even that didn't work. Go figure.

Life is simple? Then you still believe in Santa Claus.

Why am I not free to do what I want to do? Give me freedom and I'll be happy. Well, you see, it's not that easy. But, still, we insist on seeing life as simple. It all becomes so confusing. Is there any way out of this dilemma? Sure. Death! But, you say, I don't like that alternative! Okay. So, what's the solution? Good question!

Then what's the lesson? The other thing that happiness and freedom have in common is that both are what you make of it. I seem to recall that that was something said by Thoreau while he was pondering what life was all about on the shores of Walden Pond. There, he was free to think about it and happy that he had the freedom to do so. Hey, it's that simple! And, I think that's where I started this missive ... go back to the beginning.