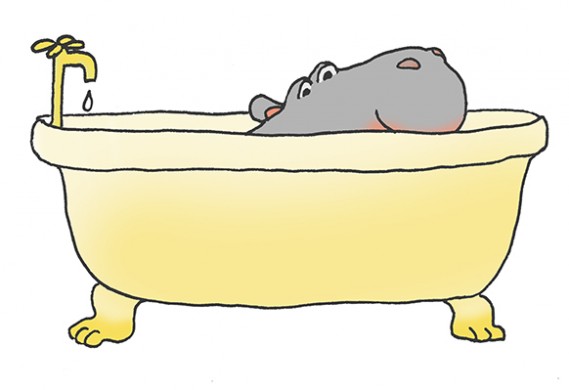 Sounds like a contradiction of terms. And it is and it isn't. That's probably why we have so much difficulty in feeling happiness. The tasks, duties, and emotions are the ephemeral residue of living that we often see only as necessities and obligations.

I didn't like taking baths when I was a kid. I would bathe, reluctantly, once a week, with my father, until I was perhaps nine or ten and had become too big to share the lion clawed porcelain tub. The bath was always on saturday night. My mother would fill the basin with very hot water. Then, my father would amerce himself into it and I would follow.

My father worked, at a Detroit factory, "10 hours a day, six days a week ... and, yeah, sometimes seven." --- was the popular mantra I heard often from his lips. Once in the hot tub, he was deep in sleep within minutes. I played with my rubber ducky or whatever he snored. At some point, he would wake up and we would wash in the now cold water that had turned a very inky shade of gray. Then he would drain the tub, turn on the faucet, and splash water over our bodies to remove the dirty oily scum that still clung to your bodies. By the time we got to that point, I was bored with the weekly exercise.

When I was 14, my parents bought a house that had a bathtub and a shower. Well, I knew a little about showers: they were modern, fast and people on TV used them more than bathtubs. I found that I liked the shower. I started taking them two or three times in a week even though I was castigated by my father because it "cost a lotta money for hot water!" It was only when I began university, and was living at a student dormitory, that I began to shower daily.

Then the morning shower became my wake up pill! It was a nice way to get into the day.

So, what began as a drudgery developed int pleasure. Very simple; and very elementary. But look to that example and think of the things that you feel the need of personally developing as a daily exercise or you want to change about yourself for whatever the motivation and/or reason.

I don't like to do that! Do what? --------------------. (Fill in the blank.) And what are some of the things you don't like to do? Eat broccoli? Pity. It seems it is a natural fighter against carcinogens; things that cause cancer. Try this, go through ten cook books and select a broccoli recipe from each. Something like Burnt Butter Broccoli with Garlic. Makes my mouth water just thinking about its taste. You might find yourself cooking it two or three times a week. By the time you know it, you'll be eating broccoli everyday from raw to being covered with hollandaise sauce ... and lovin' it!

These two simple examples are anecdotal stories of learning to like and/or love something that had been an obligation or a childhood bias. And since I mentioned garlic, I remember when I decided I didn't like it. I was perhaps 10 years old when my parents ordered a take away pizza --- it was then just the beginning of America's love affair with the Italian staple --- with everything on it. It was a particular celebration and they had ordered the most expensive pizza on the menu. Everything was there: pepperoni, mushrooms, onions, peppers, garlic, anchovis ...anchovis? "What is that long thing there?" someone had asked. My father tasted it and said, "It's fishy and very salty ... too salty!" Another celebrant, said on tasting it, "I think it's an anchovy." Well, it was quickly decided that no one liked anchovies. They picked them all from the top of the pizza. But, somehow the fishy smell --- and flavor --- was still laying atop the melted cheese and had mixed with the tomato sauce and the flavor still haunted the slices. The pizza went unfinished and ended up in the trash. Even the dog had rejected it.

For some reason, the incident inspired me to speak out. I wanted to be an adult. And it was an adult thing not to like something even when others said that it was the SuperDupperExtravagance-of-the-Kitchen and, sorry, that includes anchovies.

I decided that I would no longer eat GARLIC.

Well, garlic was well liked by my father. There was a lot of it in my mother's cooking. I picked it out when I could. I wouldn't eat certain dishes because it had been cooked in, with or next to garlic! Boy, was I a dumb kid.

Today, of course, garlic is a main staple of my daily diet. The point is, we often adopt prejudices against things and ideas more out of other considerations than the subject matter itself. Bad way tot initiate decisions, but I guess it is what we call human nature. And that is why the world is the way it is!

And who was Maxwell Perkins? Remember? The quotation, at the beginning of this piece, is credited to him ... He was an editor at an American book publisher during the first half of the twentieth century. He was responsible for the publication of F. Scott Fitzgerald and Ernest Hemingway, among others. His ancestral lineage was impeccable; he studied at Harvard University at the end of the 19th century. We think, today, that those times were less complicated. Don't believe it! No social security support systems, no antibiotics nor indoor plumbing, to mention only a couple things. But, even then, he was telling us something very fundamental to any time period in the chronological calendar of us homo sapiens.

And from that fundamental point emerges a fundamental lesson: Learn, see, do something beautiful every day is a prescription for happiness. Maybe "the beautiful" is cooking broccoli using recipe #7; or taking a shower everyday. Hey, I am surprised at the number of people I encounter, in a months time, who are emitting body odor like it was a cheap cologne! But that reality of the daily shower is only a metaphor for all those other "NO's" you just can't seem to say "NO!" to. Find pride in doing what you don't want to do. Then you may stumble across something called Happiness.