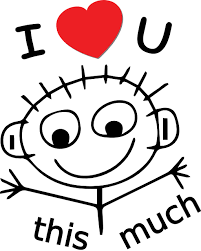 At the beginning of this opus on the theme of "happiness", I said I wanted to see where it would take me. It has, finally, lead to the term "love". I shall now attempt to describe its relationship to happiness. It seems simply enough, but ...

A simple three letter word sentence, but you can get four different perspectives by individually emphasizing each word separately. And I have left out the aural effect of inflections and sound modulations made with the human voice.

Difficult? Hey, I haven't even got to the part as to the situation, time and/or place at which the three word sentence is uttered. That is another story. What's more important is, when you said it, did you mean it or were you after something? Now, that's a hard question to have to answer. Any easy answers? Sure. Were you sincere? Sincerity works every time ... but some people are more sincere than others ... or have the innate talent or acquired skill to appear to be so.

Do you see the problem? A three word sentence that can be expressed in a way that provides a multitude of meanings.

So, what is love?

A lady related this story to me. A girlfriend of hers had called her on a Monday and said: "I met this guy, at a club, on Friday night? We went back to his place and I just got home. We did it nine times. I'm in love!" My friend replied, "You're not in love, you're in lust!"

Love and sex are hopelessly intermingled. "I love you!" is often used because the Romeo wants sex. But do love and sex have anything to do with each other? Sure. However, sex, in a relationship, can sometimes amount to having the same balance in the relationship's success as the other person's personal habits concerning hygiene, orderliness, dependability; and/or honesty to such practical considerations as personal financial independence or dependence or how they drive a car.

Notice that I have said nothing about the other person's physical aspects. Do blonds have more fun? Well, a few years back, I was talking to someone I saw often about twenty years before. I asked him about his girlfriend, at that time, but couldn't remember her name. Finally, I said, "She was a blond!", He replied, "They are all blonds!" He couldn't feel, experience or have love for another person without that condition. What a pity!

Then, there are those who look for a free ticket, for life's journey, through another person's financial position. And those who seek an identity. They become groupies; and groupies not ony flock around rock stars, politicians and professional athletes, but also authors, artists and even cops. Whatever turns you on, baby! We generally try to find an easy way to get or achieve something we desire.

Once, when I suggested to someone that many lessons on how to get through life, could be learned through a proper education, she replied, "But can't you learn form experience, too?" Oh, yes. You sure can. But it is like sticking your fingers into fire when you are three years old. You learn, but it is a painful lesson. And early on they (parents, grandparents, teachers etc.) try to teach us that the easy way comes through schooling. Some listen and some don't. Education can prevent much pain, but learning requires discipline. Discipline requires effort. Ah, yes, life is hard! The journey from birth to death is an arduous one. And you thought it was all about the birds and bees and everything else follows.

I love spicy cooking, baseball and the movies!

What do I mean by that? I mean, what kind of meaning of love is that? For only having four letters, the word has many definitions and extended usage. At this point, I turned to an on-line dictionary for an official definition: 1. A profound tender, passionate affection for another person. 2. a feeling of a warm personal attachment or deep effection, as for a parent, child or friend. 3. sexual passion or desire. And number 10: Strong predilection, enthusiasm, or liking for anything. That last one sort of takes care of spicy food, baseball and the movies. All in all, there are 21 separate definitions in th English language, for the term "love", listed at this particular site.

Another site divides the definition into two lists. One using love as a verb; and the other as a noun. As a verb: 1. feel tender affection for somebody. 2. feel desire for somebody. 3. like something very much. As a noun, love means 1: passionate affection and desire. 2. very strong affection. 3. romantic affairs.

Another four letter word shares the stage and spotlight, with love, for being overused, misused and abused. Not too long ago, an international rock star said the word f*** on US of A' on TV. They didn't like that in the Bible belt. The US Supreme Court eventually ruled that he was "not guilty" of obscenity since he had used the word as a "noun" and not as a "verb". That's the problem with four letter words ... they can take on a lot of different meanings depending on punctuation, grammar, tense and/or conjugation.

This isn't getting any easier. Do you see what I mean?

That lady I talked about in Happiness #15 -- we had four relationships over several years -- only one time uttered the magic three word sentence. It was at the beginning of our third involvement. She couldn't have done it at a more appropriate time. I had just copulated with her, after an abstence of three or so years, when she said, "I love you, Dan ... do you know what I mean by that?" Well, I was pleased to finally have heard the three little words, but incapable -- at that time -- of getting into a learned discussion on what she meant by it. And we never got around to talking about it again. She didn't bring it up ... nor did I. So, in that incident, I made a mistake. I guess I should have withdrawn my penis and said, "No, explain to me what you mean by 'I love you'". It could have saved heartache over the coming years. Then there was the lady who said -- once I was inside her -- "Tell me that you love me ... you don't have to mean it!" I couldn't say it, because I always have to mean it when I say it. What these two examples are meant to convey is that it would be, more than likely, a good idea to keep the word "love" out of the bedroom. We shouldn't say "Let's make love", but, "Let's have sex." In fact, in this case, the word "love" becomes an euphemism for the word "sex". Interesting.

You see it also when, where and how you use "I love you" that makes or can make a difference. Of course, some people are more clever than others: and that edge has the potential for using the term love as a tool of manipulation and the when, where and how is just part of the process in writing the scenario.

Ask yourself where do I fit within this equation. Only when you answer that question will you begin to understand how the other person fits in.

Be honest with yourself! Who am I; and what do I want?

The late American lovelorn columnist, Dear Abby, printed a letter, from a reader, that read something like this: "When I am bad, my husband spanks me. Then we make love. And it is wonderful; and everything is okay again." Abby replied that it was good to know that sadist and masochist find each other.

That sort of described my parents relationship. They had been married about 40 years when my mother died. In those forty years they had had but one argument ... and it lasted forty years. They conditioned me into being the "perfect" sadist: When the masochist says, "Beat me!  Beat me!" I reply, "No!". And it really pisses them off.