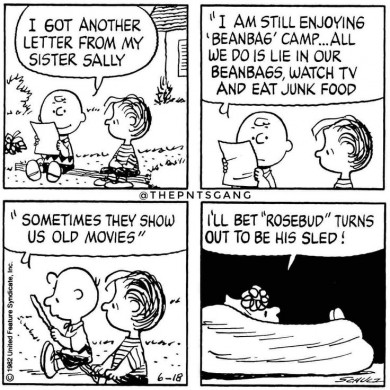 A few years back, I was talking to a film academy student. She asked me "What is yor favourite movie?" I didn't even have to think about the answer, "Citizen Kane"! She looked at me with disappointment and said, "Everyone names that film."

Well, there is a reason. I still remember the first time that I saw it. I was about 25 years old and it was the late, late show on TV. When it was over, I thought "Wow, what a movie." I also was puzzled why I had never seen it up until that time.

My film education began young, at about three years old.

My father would take me to the movies with him because he didn't like going alone and my mother didn't care for westerns and gangster films. Then there were the long summer days in Detroit when it was too hot to play outside in the green afternoon. So I watched "Bill Kennedy Show Time". He was a movie buff and always selected classic films. He gave me a good filmeducation.

But how had I missed "Citizen Kane"; on everyone's top ten list? It was because of its history.

Orson Welles was a brash young man of 26 years old when he directed, co-wrote and starred in the film. It was a thinly disguised biography of the American William Randolph Hearst who was a newspaper magnate owning, at one time, about 28 publications from coast-to-coast.

It didn't take long before word leaked out about the movie; and when premier time came Hearst took action. All his newspapers refused to review the film or carry advertisements for it. It died before it lived. RKO, the film company that produced it, lost money. It was suppressed.

It would be years before it surfaced again. First on late night television and then film festivals and retrospectives. It finally took on a life of its own and, today, it is studied and admired.

Why is it such an outstanding effort?

The story for one. Then add the outstanding acting (Welles and Joseph Cotton, both in their twenties go from that period of age to old men and convincingly); the cinematography; and the writing.

But what makes the story so gripping is how the film begins. It starts as sort of a mystery. The opening scene is a dark and gothic like night with a "castle" in the background. The next scene shows an old man lying motionless and he is holding a snow globe. At one point he whispers "Rosebud" and dies.

The next scene is a private film viewing theatre for a film journal company. The editor-in-chief is facing his reporters saying that this is an important story because Kane was an important man. Rich, succesful in business and at one time an aspiring politician with dreams of the White House. But who was he really?  "Rosebud! His dying word ... that's the key. Found out what or who rosebud was and we'll know the man."

We then follow one of the reporters as he goes about interviewing people who participated in the different periods of his life. The journalist interviews the man who became his guardian when Kane was perhaps ten years old. There is a telling scene of Kane and the guardian's first meeting; it is in a cabin like house. The young Kane has been sledding, in the snow, and is called inside by his father who is also, obviously, his buddy. His stern, but loving mother stands next to her husband and explains to the boy that the man will take him to the big city to be educated, in the finest schools, because their cabin sits on a motherload of silver and he will be very rich some day.

He must learn how to handle such a life.

We progress from there to his early years as an up and coming business tycoon. We are introduced to the beautiful woman who will become his wife and raise the children; to his girl friends --- one on each arm --- and, finally, his mistress, the great love of his life. To all these people the question is put "Does the word rosebud mean anything to you?" And no one has an answer. The short film biography is made, to be shown in the cinemas across the country, but does not make reference to Kane's final words.

The final scene of the film shows a basement with a large furnace. A man is feeding into the burning holocaust assorted and presumably worthless junk that has been collected from all areas of the huge mansion. He picks up a child's snow sled and throws it into the blazing inferno. The camera follows. Flames are already lapping at its side and there in the middle we see stencilled  "Rosebud".

Kane's last thought, before dying, was that day when he left his parents modest abode to start a new and exciting life. Everything that followed, the riches, the glamour and the power did not bring him the happiness that he had had with his humble surroundings and loving parents.

The lesson is that happiness is so illusive that we don't know it when we have it.