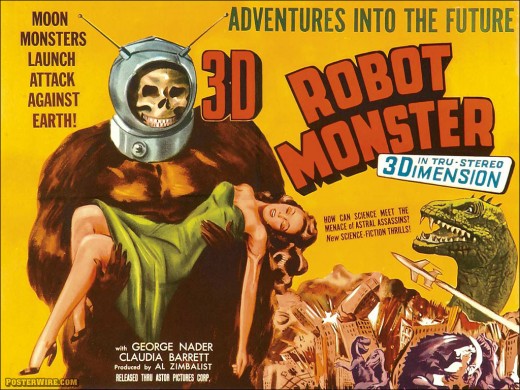 There have been numerous B-movies included among these Schlockmeister reviews that have been rebuked, condemned, mocked and ridiculed. But, compared to this one, they all now seem like outstanding 5-star productions.   "Robot Monster" is the absolute bottom of the barrel, unequivocally the worst Science Fiction film ever produced.

"Ro-Man" is zapped to Earth in a bolt of extra-terrestrial lightning from a dying planet as a precursor to a full-scale invasion.But, if they are all  as dumb as this guy is ... then Earth has nothing to worry about. Played by an actor in a gorilla suit, with a diving helmet for a head, (a studio cost-cutting measure, I'm sure ...),  he has been sent to Earth to eradicate the last 6 humans on the planet, since all the other countless billions have already been terminated.  (Huh?)   But these 6  ... a professor, his wife, and their 3 children (2 youngsters and an older daughter), and a scientist, played by George Nader  (who must have been desperate for work), are all part of the professor's experiment of some kind, and have been injected with some kind of anti-toxins, by which they have eluded the genocide of the rest of the human race.  Ro-Man's mission:  destroy them !!

The first order of business he completes is to set up shop in some remote cave among the barren rocks of some remote canyon, complete with a TV to communicate with his superior, The Great One, living the good life back on his un-named planet  (but which should be named ...maybe..."Idiotland'" ).

For ambiance, he installs a bubble machine (likely stolen from a Lawrence Welk set) .

Ro-Man , cleverly the antithesis of Hu-Man , doesn't have a clue about how to complete his mission, and fails miserably at every attempt. But he does manage to abduct the older comely daughter of the professor (Read:  HOT BABE), and drag her back to his cave. He reports the good news to The Great One,  but is then ordered to kill her.  Ro-Man, however, at this point being over-sexed and under-loved, and hot and horny as a hoot owl in that confining gorilla suit, is conflicted between lust and blind obedience.  He stalls, and this does not please The Great One.  He walks around the outside of that cave a lot, talking to himself , and pontificating in grandiose style, exposing his inner turmoil for all who care to listen... for which there is ... no one.   Eventually The Great One can stand no more, and zaps Ro-Man into cosmic eternity. The poignant death scene ... is a real weeper.

In the end, we all learn that this entire travesty has actually all been a dream, of the professor's young son.  Thus,  there has been no invasion, no annihilation of humanity, and most importantly, no real bubbles. Phew!!!   Now that ... was a close call!!!

George Nader won a special Academy Award for bravery for allowing his name to be listed as a star in the credits for this film, a film which, as a whole, essentially becomes  the real travesty of this entire enterprise. Supporting awards were also bestowed upon the 2 giant fighting lizards rolling around in the turf on not one, but 2 separate occasions, blatantly stolen from 1940's  "ONE MILLION B.C. "   Critics have yet to figure out why they did this, as it had no connection to the storyline.

On The Schlockmeister Scale of Worthiness, this film merits an Absolute Zero.    Patrons, after leaving the theatre showing this movie, actually hoped that their attendance itself  was really all a bad dream as well, and that they hadn't actually paid an admission price to see it.  Despite this, they likely admitted that the special effects in the film were one of a kind and state of the art ... as long as you think strictly in terms of bubble production.  And, in retrospect, I'll bet they recalled at least one famous line extracted from this classic ... from Ro-Man, himself, when he said:   "Show yourselves, and I promise you a painless death."

No thanks, Ro-Man ...after watching this clunker, we've already been there ... and done that !!!