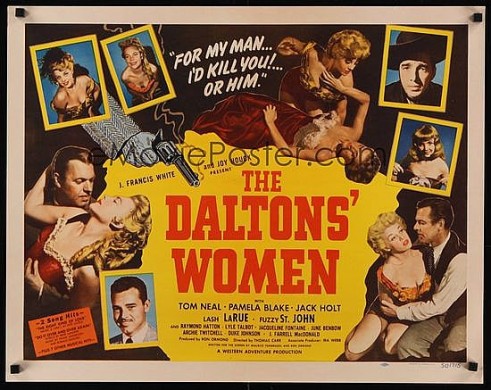 For a Lash movie, I must say, this one isn't half-bad...................it's all bad.     Lash and Fuzzy once again go undercover, this time to infiltrate the Dalton Gang. Some critics previously panned this film, implying that it wasn't really a Lash vehicle.  But, unfortunately, it is. What is somewhat strange....there are no Dalton "women" in it, in spite of the title.

It does, however, show off no less than 10 different women....of varying degrees of  'dogness'.  And, it does have numerous musical acts coming from the saloon stage. First, there's a quintet of lovely "Can-Can" girls, who ply their trade more than once, showing off some rather large tushes.  Then there's a male quartet of "barbershop singers", singing songs from the '60's (the 17-60's); then a solo blonde bombshell canary, who has 2 full numbers, and finally a juggler, with 2 female assistants to pretty-up the stage.  Then there's a saloon girl working on the same male customer throughout the film, and a "hot" undercover Pinkerton plant, also working as a saloon girl, when she's not making eyes at Lash. (Did she not know he was likely gay?)

With all this adornment, how could this movie go bad?  (But I repeat myself: this is a Lash movie!)  It also has a great villain, Jack Holt (Tim's father), and a great character actor, and former Johnny Mack Brown sidekick, Raymond Hatton, playing a crooked sheriff, and on the take. (Johnny would not be pleased with this role for his former sidekick.)

Lash & Fuzzy bumble about, with Lash landing a job as a blackjack dealer in a saloon owned by "The Boss"  (who else?), but only after he beats to a pulp the original dealer who was as crooked as they come. Lash shows off his fisticuff prowess in several brawls, ending each one with his now-patented lower-cut, a haymaker to the chin from the ozone layer. This film also has probably the best cat-fight in B-Western history, a knock-down, drag-out epic between that one-man B-girl and the solo singer, who makes too many goo-goo eyes during a song directed to the mark the B-girl has been working on. This fight lasts 35 minutes, more than half of the entire film!  (Or so it seems.) The saloon girl, somewhat smaller and an A-cup at that, finally lands a right cross to the singer's chin, and she and her impressive D-cups go down for the count.  >>>Great fight.<<<

The movie wraps up with all the bad guys vanquished (surprise, surprise...).  The Pinkerton detective spy, now surmising that Lash is hopelessly gay, gives Fuzzy a kiss at the conclusion, he faints, and  "The End" .........doesn't come soon enough. The Schlockmeister recommends you miss this epic at all costs.

It's time to go back to school! Get the latest trends and gadgets that make the grade on