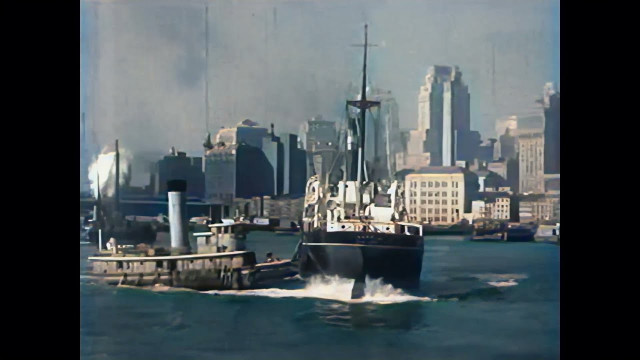 This newly uploaded film, made in the same year 1937, zooms further in on the hard lives of the many New Yorkers who lived and worked along the Manhattan Waterfront.

Among other, it shows the many fishermen who earn their daily bread at the Fulton fish market, the men that work on the steam tug boats and also empoverished men who live in delapidated shacks at the waterfront or on old barges. The views of the bustling activities on the shores of lower Manhatten and of its skyline are stunning!

Some viewers may recognize the fisherman at 04:20 who also appears as the oyster seller in the other film about New York in 1937 at 08:05.

The original film titled "Manhatten Waterfront" by the Van Bueren film company, has been motion-stabilized, speed-corrected, restored, enhanced and colorized by means of state of the art Artificial Intelligence (A.I.) software. In order to keep the sound synchronised with the film it has been reduced in speed by 20 percent. The pitch has been preserved but the speech may sound slightly slurred. This was the best compromise. Much obliged Rick88888888

A letter of appreciation from the 39th U.S. President and the Nobel Peace Prize recipient Jimmy Carter!

Painting on the occasion of Obama’s “A Promised Land”

Tour through MoMA, The Museum of Modern Art and Central Park in New York City in 4k

Face the Dutch in New York

Stunning views of New York's Skyline from the Hudson river in the 1930s in color!