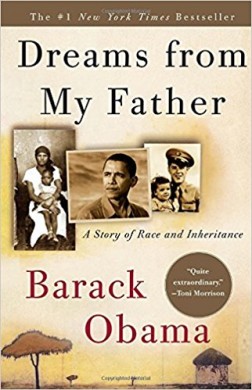 A "deadly" article regarding Obama, at the Wall Street Journal, which
today is the most widely circulated newspaper in America .

Article from the Wall Street Journal - by Eddie Sessions:

"I have this theory about Barack Obama. I think he ' s led a kind of
make-believe life in which money was provided and doors were opened
because at some point early on somebody or some group (George Soros
anybody?) took a look at this tall, good looking, half-white,
half-black, young man with an exotic African/Muslim name and
concluded he could be guided toward a life in politics where his facile
speaking skills could even put him in the White House.

In a very real way, he has been a young man in a very big hurry.
Who else do you know has written two memoirs before the age of 45?
"Dreams of My Father" was published in 1995 when he was only 34 years
old. The "Audacity of Hope" followed in 2006. If, indeed, he did
write them himself. There are some who think that his mentor and
friend, Bill Ayers, a man who calls himself a "communist with a small
' c ' " was the real author.

His political skills consisted of rarely voting on anything that
might be deemed controversial.. He went from a legislator in the
Illinois legislature to the Senator from that state because he had
the good fortune of having Mayor Daley ' s formidable political machine
at his disposal.

He was in the U.S. Senate so briefly that his bid for the presidency
was either an act of astonishing self-confidence or part of some
greater game plan that had been determined before he first stepped
foot in the Capital.. How, many must wonder, was he selected to be a
2004 keynote speaker at the Democrat convention that nominated John
Kerry when virtually no one had ever even heard of him before?

He outmaneuvered Hillary Clinton in primaries. He took Iowa by
storm. A charming young man, an anomaly in the state with a very
small black population, he oozed "cool" in a place where agriculture
was the antithesis of cool. He dazzled the locals. And he had an
army of volunteers drawn to a charisma that hid any real substance.

And then he had the great good fortune of having the Republicans
select one of the most inept candidates for the presidency since Bob
Dole. And then John McCain did something crazy. He picked Sarah
Palin, an unknown female governor from the very distant state of
Alaska . It was a ticket that was reminiscent of 1984 ' s Walter
Mondale and Geraldine Ferraro and they went down to defeat.

The mainstream political media fell in love with him. It was a
schoolgirl crush with febrile commentators like Chris Mathews swooning
then and now over the man. The venom directed against McCain and, in
particular, Palin, was extraordinary.

Now, 3 full years into his presidency, all of those gilded
years leading up to the White House have left him unprepared to be
President.. Left to his own instincts, he has a talent for saying the
wrong thing at the wrong time. It swiftly became a joke that he
could not deliver even the briefest of statements without the
ever-present Tele-Prompters.

Far worse, however, is his capacity to want to "wish away" some
terrible realities, not the least of which is the Islamist intention
to destroy America and enslave the West. Any student of history
knows how swiftly Islam initially spread. It knocked on the doors of
Europe, having gained a foothold in Spain ...

The great crowds that greeted him at home or on his campaign "world
tour" were no substitute for having even the slightest grasp of
history and the reality of a world filled with really bad people with
really bad intentions.

Oddly and perhaps even inevitably, his political experience, a
cakewalk, has positioned him to destroy the Democrat Party ' s hold on
power in Congress because in the end it was never about the Party.
It was always about his communist ideology, learned at an early age
from family, mentors, college professors, and extreme leftist friends
and colleagues.

Obama is a man who could deliver a snap judgment about a Boston
police officer who arrested an "obstreperous" Harvard
professor-friend, but would warn Americans against "jumping to
conclusions" about a mass murderer at Fort Hood who shouted "Allahu
Akbar." The absurdity of that was lost on no one. He has since
compounded this by calling the Christmas bomber "an isolated extremist"
only to have to admit a day or two later that he was part of an al
Qaeda plot.

He is a man who could strive to close down our detention facility at
Guantanamo even though those released were known to have returned to
the battlefield against America . He could even instruct his
Attorney General to afford the perpetrator of 9/11 a civil trial when
no one else would ever even consider such an obscenity. And he is a
man who could wait three days before having anything to say about the
perpetrator of yet another terrorist attack on Americans and then
have to elaborate on his remarks the following day because his first
statement was so lame.

The pattern repeats itself. He either blames any problem on the Bush
administration or he naively seeks to wish away the truth.

Knock, knock. Anyone home? Anyone there? Barack Obama exists only
as the sock puppet of his handlers, of the people who have maneuvered
and manufactured this pathetic individual ' s life.

When anyone else would quickly and easily produce a birth
certificate, this man spent over a million dollars to deny access
to his. Most other documents, the paper trail we all leave in our
wake, have been sequestered from review. He has lived a make-believe
life whose true facts remain hidden.

We laugh at the ventriloquist ' s dummy, but what do you do when the
dummy is President of the United States of America ?

Well, you did it again.

In reading through  this article I thought that some of what the man said could be fact----like someone in the wings preparing Obama for the WH (I should one day explain Ronnie's road map to the WH. It began when he married Nancy. Her step-father, a neurosurgeon and national Republican leader, took him aside and said, "Son, I can make you a real star. And he did). However, there were things that were said, in the article, that I didn't think would appear in the Wall Street Journal---even though it is another Murdock publication. Things like---in referring to his youth---"it was always about his communist ideology..." That would be cause for a libel suit. Then he talks about Obama "could not deliver even the briefest of statements without the ever-present Tele-Prompters." In all my reading, I never read that. But I did read how your boy Georgie-Porgie Bush got caught, during a debate, wearing an ear phone which his "advisors" (the ones pulling his puppet strings)  fed him the answers.

But, I digress...These points, and a few others, motivated me to Google: Eddie Sessions, The WSJ. Here is what came up: "The above referenced opinion piece about B. Obama "Make Believe Life" has been widely circulated with an attribution indicating it to be a WSJ article authored by Eddie Sessions. However we found no indication that it had been published in print or on-line edition of that newspaper, nor that it was written by someone named Eddie Sessions." www.scopes.com

You are so gullible...And that is the nicest way I can put it. You and your right wing radical friends thing that you can convince people of your side of things by lying. And you do it over and over again. As I keep saying to you, shame on you. You are not a patriot. You are only someone with your own personal agenda. And what I find that  is morally wrong is that you DEMAND that laws and regulation be made to suit your beliefs, agendas and concept of government in violation of the irghts of others being it gay marriage, abortion, gun control, et al.