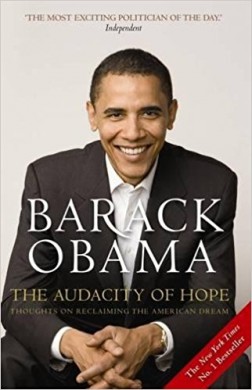 What are we "Hoping" for now?

as the years pass .... need I say more about this person below other than there is no character, no integrity but there is a ton of attitude and arrogance that defines his shallow past and hollow future. I rest my case...

I bought and read Obama's book, Audacity of Hope. It was difficult to read considering his attitude toward us and everything American.

Let me add a phrase he used to describe his attitude toward whites.

He harbors a "COIL OF RAGE". His words not mine.

THIS IS OUR PRESIDENT -- HE'S RUNNING AGAIN, YOU KNOW!

Is anyone out there awake?

Everyone of voting age should read these two books by him: Don't buy them, just get them from the library.

"I ceased to advertise my mother's race at the age of 12 or 13, when I began to suspect that by doing so I was ingratiating myself to whites."

From Dreams From My Father :

"I found a solace in nursing a pervasive sense of grievance and animosity against my mother's race."

"There was something about her that made me wary, a little too sure of herself, maybe and white."

From Dreams From My Father: "It remained necessary to prove which side you were on, to show your loyalty to the black masses, to strike out and name names."

"I never emulate white men and brown men whose fates didn't speak to my own. It was into my father's image, the black man, son of Africa, that I'd packed all the attributes I sought in myself: the attributes of Martin and Malcolm, DuBois and Mandela."

From Audacity of Hope:

"I will stand with the Muslims should the political winds shift in an ugly direction."

If you have never forwarded an e-mail, now is the time to do so!!!

We have someone with this mentality running our GREAT nation!

Keep your eye on him and don't blink.

I don't care whether you are a Democrat, a Republican, a Conservative or a liberal, be aware of the attitude and character of this sitting President.