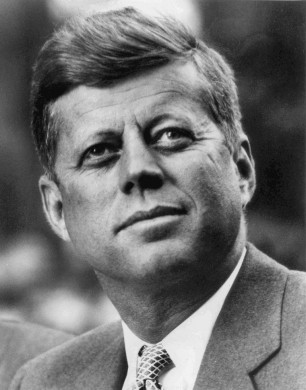 I only alluded to your description of an apparition when I discussed my precognitive experiences. I should have dealt more directly with the incidents, but got side tracked.

In my case, my first experience with an apparition was when I was perhaps nine or ten. It happened on Lincoln's birthday. I had seen on TV a program about him. That night, laying in bed, I felt someone tapping me on the leg. Startled, I looked up to see the man himself. I don't remember any discourse, but I do recall it was a call to me to somehow follow in his footsteps. On November 21st 1964, I joined the Young Democrats. The impetus, to my choice, of political party was of course Kennedy. The next day he was assassinated.

I stayed with it for a little over a year and rose quickly to a position at the Missouri state level of the YDs (editor: Young Democrats). It was there that I encountered the back-biting and realized that the majority of my fellow Democrat' "idealist" were in it for themselves. I became disillusioned. So, apparition or no apparition, when I moved to Chicago, I did not continue to pursue my ambition to be president of the USofA. No regrets. In fact, it was a narrow escape because I am sure I would have become one of "them" had I continued to pursue a political career.

Another incident was an out of the body experience at the age of 11 or so. I had a high fever and found myself staring down at at my limp body as I levitated over it.

Both these occurrences are still vivid in my mind. However, I now realize that scores, hundreds and thousands over the centuries have experienced such events.

What do you know of the Rosicrucian's? As a teenager, I would see these rather mysterious advertisements at the back of Popular Mechanics. They alluded to the paranormal but never said anything specific. Over the years, their mention popped up here and there in my reading. Finally, I had working for me, as my promotional manager, at the Dutch publisher I was with in the early 80s, a woman, who along with her husband, had been a practicing Rosicrucian for a few years. She said that they left the movement because of experiences that scared both her and her husband that neither could explain. She was not an excitable type. She was a down to earth and  typical conservative Dutch Calvinist. And she would not and, in fact, refused to talk about the experiences.

I mention all this because I do want to impress on you that I do not deny, nor contest your moment of revelation in the presence of a deity. Again, the point is, it is not uncommon and more importantly should not be taken seriously. I assume that there are scientific neurological glitches that induce these moments of "clarity." It is a common occurrence with people dropping acid and I still read about those who have experienced the "nature of life" under the influence of peyote.

But, again, so far your only message is that there is a God. I don't deny a higher authority; but I am only willing to debate the definition that people give it. Mine is scientific and all the facts are not yet available. The goal of Singularity University is to accumulate data---using the new tools available---to help us in an understanding of our being and meaning of it or if there is one. Is the human race an accident of nature or is it somehow preordained? And, again, if preordained, is it not so done by the interaction of simple chemical compounds that when combined have exponential results that are chemical, biological and "spiritual" in ways that we do not yet understand?

Einstein said, "Not only is the universe a queer place. It is queerer than we could ever imagine."

P.S. We had a holiday yesterday so my personal writing schedule expanded by an extra day.