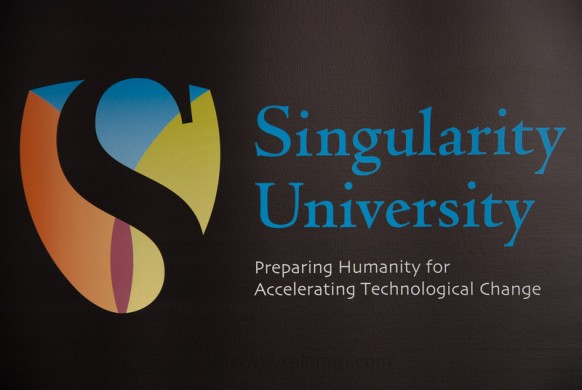 I have a message of relatively high urgency that I need to have translated into multitudinous languages and be disseminated worldwide with as much impact and notice as can be generated.

If I understand your basic principles and goals correctly, Singularity University should have both in-house skills and  a network of graduates and colleagues to accomplish this feat easily. Assets that I, sadly, lack.

Performance of this dissemination would be a strong affirmation of your core curriculum.

The message is remarkably congruent with the principles and goals of Singularity University. A precis of the message is attached for those who choose to read that far.

So what is the downside? Why wouldn't Singularity U want to perform such a demonstration?

Simply put, because I believe God has persuaded me to accept the assignment of delivering this message. I didn't want the assignment. I still would prefer not to have it, but if I must do it, it seems that Singularity could provide a path for success that I am simply not able to provide.

I am keenly aware that even mentioning  God in conjunction with my message makes people uncomfortable-if not actually hostile.

I am just as keenly aware that one can easily argue that messages from God are not within the province of secular universities.

How could I have the audacity to ask for your assistance if I know all the downside?

Firstly, because I seek nothing other than the demonstration Singularity can provide.

I seek no endorsement or certification.

I seek no followers or acolytes.

I want no contributions.

I most definitely do not want to start another religion-too many already exist, most of them perverting the original message of their supposed founders.

I am not looking for an affirmation of my life or some crowning achievement to give it meaning. I have had the extremely good luck to have had a personal relationship with God for over half a century-not that that would make me anything special. The essence of the message is God is trying to communicate with all of us, and anybody with good will can also have a personal relationship with

Him if he/she just becomes more sensitive and open to the messages He is already sending.

All I am asking for is Dr. Johnson's "willing suspension of disbelief" as you consider my request for a demonstration of capabilities Singularity University is uniquely positioned to supply. Please do not make a solitary decision to reject.

Thank you for any attention,

P.S. Whatever interpretation is put on the inspiration for the message, the message needs to be       disseminated.

The message in short form follows

God has given us generous and magnificent gifts. They should be acknowledged and used.

A paradise when we inherited it, still pretty fabulous despite our efforts to turn it into a dung heap. Why not enjoy it? Watch young children run with their arms outstretched, laughing as they embrace the joy of life on Earth. Why not express some gratitude instead of continually asking for what others might have?

Earth is a fragile space ship on which we are all fellow travelers in a  dangerous and potentially hostile environment. We need to address the absolute necessity of working together to promote the survival of the space  ship and its passengers instead of playing zero sum games attempting to accumulate the riches of the planet.

We can think. We can plan. We can organize. We can imagine. We can create. We can accomplish utterly astounding feats. We have an obligation to use these faculties to take charge of our own destinies as individuals as groups or communities, and especially as the sentient beings God wants us to be.

We started as the most vicious, ruthless, murderous, ravenous, exploitative, polluting order of beings on Earth and we are progressing toward becoming stewards and protectors of Earth and its life forms. More improvement is needed, and we have been given the faculties to do just that.

Organized religions will condemn this message. Ignore them. Most of them have failed miserably at translating the messages of their supposed founders. God wants no hatred between religions.

He wants no violence between religions. He alone will decide what is heresy, what is blasphemy, what is apostasy. Don't let other people tell you what God wants, He is perfectly willing to communicate directly without intermediaries. Open yourself to receive and understand the messages he is even now sending us,and which most of us ignore.

We are rapidly approaching an epochal event, a tipping point in which we will either graduate to the next level of our development or we will descend into the chaos and failure the forces of evil prefer for us.

The convergence of technologies and advanced capabilities Singularity University was founded to focus upon needs the human race to step up and begin utilizing God's wonderful gifts to think for ourselves and break free from the herd-like suspicion, enmity and superstition that have held us back far too long.

(Editor: Singularity University (abbreviated SU) is a Silicon Valley think tank that offers educational programs and a business incubator. According to its website, it focuses on scientific progress and "exponential" technologies. It was founded in 2008 by Peter Diamandis and Ray Kurzweil at the NASA Research Park in California, United States.)