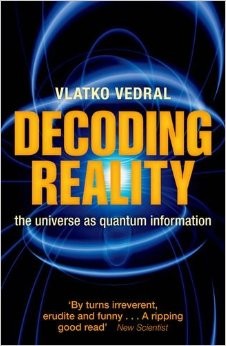 Scroll down for my last e-mail on the subject of your appiration.

Since writing the series I have read a book titled "Decoding Reality", by Vlatko Vedral (Oxford Univ Press, 2010).

On page three the writer ways, "Information is physical!" My first thought was "What does he mean by that? On page 22, he says, "Here we will view the universe  as a big quantum computer program, running the biggest possible computer game to generate our reality." This is akin to my descriptrion of a "god" as a super dupper software program that controls everything.

He also addresses the god-issue from the first page with this overview: Ït is predominant belief in Catholism...that the Creator achieved full creation of the Universe from nothing---a belief that goes under the nake of creation ex nihilo....Postulating a supernatural being does not really explain reality since then we only displace the question of the origins of reality to explaining the existence of the supernatural being. To this no religion offers any real answers...According to the German philospher Ludwig Feuerbach, 'Man first unconsciously and involuntarily creates Gof in his own image, and after this God consciously and voluntarily creates man in his own image.' If we take God as synonymous to reality, than reality and Man's perception of it are, in fact, inseperable. Man creates reality and then uses reality to describe himself. As we strive to reduce complexity, it is again unsurpring that we try to build our reality on the simplest possible causes."

Further on he actually quotes Donald Rumsfeld who, unbeknown to him, paraphrased the scientist Shannon's views of quantum information theory when he told us, "that some of the unknown unknowns have now become known unknowns or even known knowns. This does not exclude that fact that there may be many more unknown unknowns, i.e. we still don't know what we don't know. Essentially, there is still much to look forward to!" I recently qjuoted the followig on my 3D List, it is from the New Scientist: "We know only 5% of what we will know in 50 years." How true.

Have you been reading about quantum computing? One hundred years from now, a quantum computer, held in your hand, will have the memory and power of 100,000 super computers operating today. It is then that we will be able to really begin to understand what's its all about!

Remember when I quoted Galileo and his description of the Universe? Here it is again, said differently, 'Galileo clearly  expresses the view that the truths in the Universe are encoded into mathematics: 'Philosophy is written in this grand book---I mean the Universe---which stands continually open to our gaze, but cannnot be understood unless one first  learns  to comprehend the language in which it is written. It is written in the language of Mathematics, and its characters are triangles, circles, and other geometric figures, without which it is humanly impossible to understand a single word of it; without these, one is wandering about in a dark labyrinth.'" And the author elaborates, "The Universe can therefore be seen as an information processor, in other words a gigantic quantum computer."

And it gets better..."There is a close theological  position  to the general Popperian  philosophy of science (To wit: "How can we be sure of anything that comes from science? We cannot. But, rather that this being a problem, Popper thought that this was the whole point of science! Namely, a theory is only genuine if there is a way of falsifying it! If under no circumstances can you disprove your theory...then this theory is worthless as far as knowledge is concerned because you can never test it. Popper therefore turned a seemingly negative feature of science....into the most fundamental and necessary feature. It is through centuries of refutations, falsifying (i.e. refuting), and improving on theories (i.e. conjecturing), that science has progressed to where it is today" and this position is "known as Via Negativa (or Negative Way). It was apparently held originally by the Cappadocian Fathers of the fourth century, who based their whole world-view on questions which cannot be answered. For example, they proclaimed that, while they believed in God, they did not believe that God exists. This may appear to be a great contradiction, but it really is not...the Coppadocian Fathers believed that one should rescribe the nature of God by focusing on what God is not rather than on what God is.  The basic premise of this 'negative' theology is that God is so far beyond human understanding and experience, that the only hope we have of getting close to the nature of God is to list all his [sic] negative features. And therefore we cannot say that God exists, because existence is a human notion and as such it may not apply to God. This list of what God is not...is certainly rather reminiscent of the laws of physics and the general spirit of science. Physicists cannot really tell you what the Universe is or how exactly it behaves...But we can certainly tell you what it is not."

Now that we are down to the real nitty-gritty of this God question let's get to the heart of the matter. "The laws of  physics are the compression of reality which, when run on a universal quantum computer, produce reality. Since we are trying to explain the origin of everything, where does that computer come from?...can the laws of and the computer be created at the same time out of nothing?" One possible answer is "...that someone created the laws and the computer to start with. Traditionally, God has been assumed to be the original information creator. Alas, then we have to explain the origin of God, which is equally difficult." Remember, Bob, your "definition" of God is: God is!   All answers of this type quickly lead to what is called an infinite regression, which we encountered earlier. For every creator, we seem to need to invent another creator that created it. God created our Universe, and another god created the first god and so on ad infinitum...This is no real solution, and cannot form the basis for answers to questions such as 'How come reality exists?'...Throughout the ages it is interesting to note how the image of a god has changed in line with human knowledge. Prehistoric humans saw a different god in every element of life and each god had fo create that element and thereafter be responsible for it...There were also several religions that were persuing a monotheistic view of god, for example Judaism, Christianity, and Islam...The monotheistic view has survived for over two millennia but God's profession has changed somewhat. To Johannes Kepler, in the sixteenth century, God was a geometer, while for Newton, a century later, God was a physicist who, after creating the law of physics together with the Universe, sat back and watched reality evolve...In the latest incarnation of this story, we are talking about God as a computer scientist, sitting down and programing the Universe. Although none of these roles that God has played can answer the question of the origin of information, there seems to be a distinct trend to God's role---namely, God seems to be less and less involved."

This brings us up to the point where if we discount the existence of a God then how did something---out reality---come from nothing. "There is a nice parallel in mathematics to what we are trying to argue for here, which is simple a version of the 'creation out of nothing.' A fascinating method of creating natural numbers out of empty sets was devised by Von Neumann in the 20s. Here is what he imagined. A set is a collection of things (just like the Universe). An empty set is a collection that contains nothing at all----you can think of this as zero information. Von Neumann proposed that all numbers could be bootstrapped out of the empty set by the operations of the mind...the mind observes the empty sets. It is not difficult to imagine this empty set also containing an empty set within itself. But hold on, we now have an empty set containing an empty set so does this means that the original set has an element (albeit the element is an empty set)? Yes, the mind has thus generated the number one by reducing the set containing the empty set...." Well, he goes on to further explain this and at one point says "I hope your head is not spinning by now!" It sure was and still is. I am having trouble in comprehending what he is saying. But he goes on to say, "Starting with no information can...surprisingly lead to a great deal of information...In other words we seem to have created an infinite amount of information from zero information." He goes on to compare the same thing with that of Buddhism and other eastern religions. he says there is a "whole branch of philosophy, known as ontology. Devoted to the questions such as 'What does it mean to be?'or 'What exists and in what sense is it real?'"

I will conclude this with this, "Leibniz's logic was that the simplest possible state of the Universe is the one that contains nothing, so the fact that we see something is for him the best proof for the existence of God. However, in our picture, having nothing at the beginning corresponds to no information. In Shannon's theory this would mean zero entropy of the whole Universe. Any subsequent information gain is not necessarily proof for the existence of god because, as we have seen, mutual information can ultimately "be generated locally even though the information overall remains zero."