Home » Article » Prinsjesdag through the eyes of Dennis Callan

Prinsjesdag through the eyes of Dennis Callan 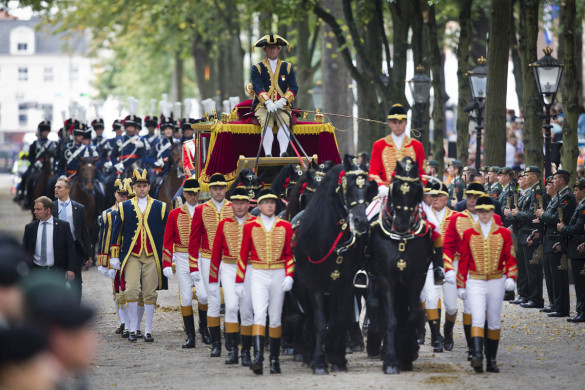 Prinsjesdag through the eyes of Dennis Callan

Dennis Callan made a report about Prinsjesdag, which takes place annually on the third Tuesday in September. On that day the king gives the Speech from the Throne and before he does so he goes with a carriage and goes with a large procession with marching bands to the Ridderzaal.

Unfortunately, due to corona, this beautiful tradition could not take place in the usual way in 2020. But we expect this to be possible in 2021.

Dennis Callan: One of the most colorful and exciting days of the year in the Netherlands is Prince’s Day (Prinsjesdag) which happens in the Hague when the king rides in his golden coach in a major parade through town with lots of marching bands and soldiers on horseback, with traditional colorful outfits and thousands of people cheering as the parade goes by.

It's a big outdoor party for people of all ages and kids are especially happy because they get the day off from school. You might be surprised to think that a political speech that's all about the budget for the year would turn out such an enthusiastic crowd, but it's really all about the king and the people's long-standing love and appreciation for the monarchy and they like the razzle-dazzle of the fancy parade.

The king leaves the Palace

This special day happens just once a year on the third Tuesday in September and begins at the stroke of one when the king, accompanied by other members of the royal household, leaves the palace in his golden carriage, which is only seen publicly on this one day of the year.

Heading to parliament to give a speech, accompanied by court dignitaries and a military escort of honor, along with various marching bands and many soldiers marching by in colorful outfits. We’re going to show you a lot of the exciting visual highlights and explain to you what's going on during this special day when the government is coming back into session after their summer vacation.