Home » Article » The Gala of the Peace, Justice and Security Foundation 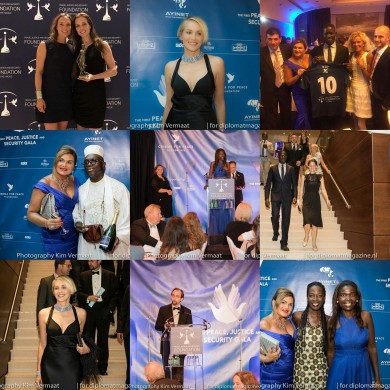 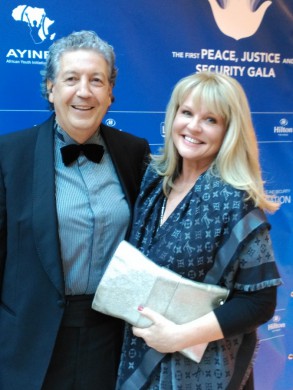 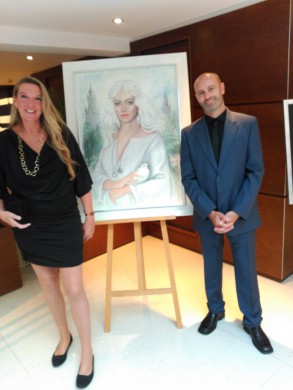 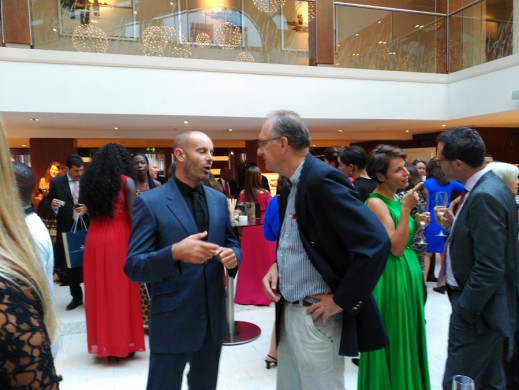 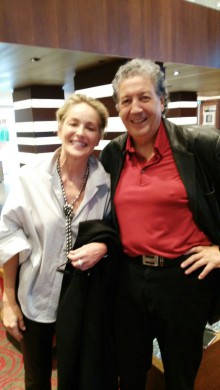 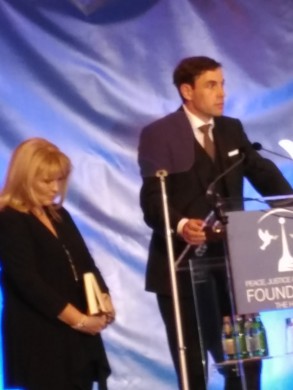 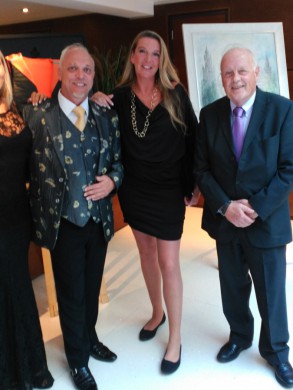 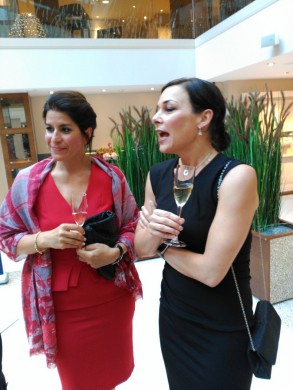 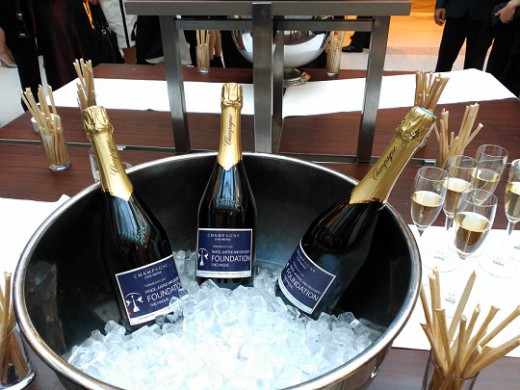 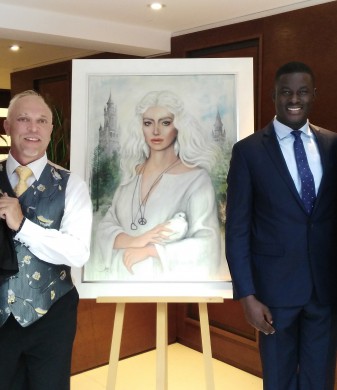 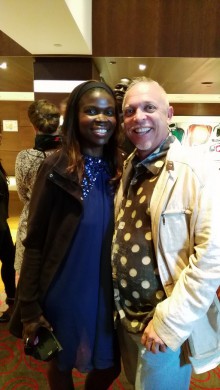 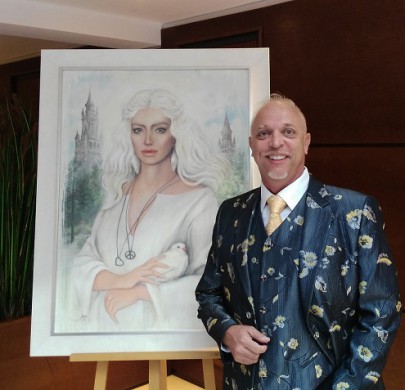 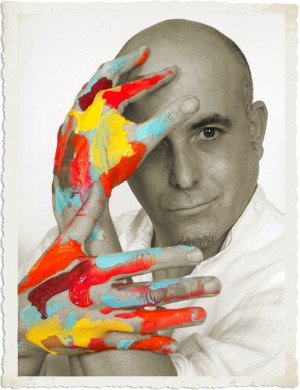 Last week, the Peace, Justice and Security Foundation presented itself to the world through a Gala.  The gala took place in The Hague Hilton Hotel. As it goes with a gala, men and women walked around in their finest clothing.

We gathered in the front hall before we went into the main hall.  Dozens of photographers and videographers captured participants and celebrities in various combinations. There were also some works of art to admire that would be auctioned later in the evening to increase the resources of the new Foundation.

The Foundation is the brainchild of a few individuals operating in The Hague in the international institutions for peace and security, notably the International Criminal Court. In particular we can mention Florence Olara and Philipp Amann. The Foundation aims to raise awareness of cruel, oppressive and sometimes horrible events in the light of law, justice, peace and security around the world. This is done by means of concrete actions.

The main hall of the Hilton looked festive. There were many round tables where we could sit down. On the long side was the stage. I found myself in the company of some people from Spain and England who had made a considerable effort for the Foundation in the form of an Anthem ‘Ever Changing World’, a musical composition for the Foundation (Dario Poli, David Mairs, David & Joe Redston), and a painting of the ‘Donna of Peace’ (Mugge Fischer & Ose del Sol).

Between the different dishes we were presented with a program. Florence Olara and Marco Gercke introduced the new Foundation and the program. The Justitia Award would be presented by celebrities like film stars Sharon Stone (also UNICEF ambassador), Katja Riemann (also ambassador Development Goals UN) and Victor Ochen, founder of the African Youth Initiative Network and last year’s Nobel Prize candidate.

And then there were the other speakers. Sylvia Fernandez de Gurmendi, president of the ICC, was pleased with the initiative of the new Foundation. Zeid Ra’ad Al Hussein, UN High Commissionar of Human Rights, held a flaming speech which was the next day in all the newspapers and made us come out of our chair to applaud.

He adressed a statement to Geert Wilders, Ms Le Pen and Mr. Trump, Orban, Zeman, Hofer, Fico and Farage. “All seek in varying degrees to recover a past, halcyon and so pure in form, where sunlit fields are settled by peoples united by ethnicity or religion – living peacefully in isolation, pilots of their fate, free of crime, foreign influence and war. A past that most certainly, in reality, did not exist anywhere, ever.  Europe’s past, as we all know, was for centuries anything but that. The proposition of recovering a supposedly perfect past is fiction; its merchants are cheats. Clever cheats. (..) They use the same tactics, oversimplification, as Da’esh (ISIS).”

Dr. Mary Aitken, the authority in the area of cybercrime, whose New Zealand sister sat at our table, talked about the forms that cybercrime had taken today, about which she had recently published the book ‘The Cyber Effect’. And then there was the presentation of the Justitia Award.

The winners of the Award were Freddy Mutanguha from Rwanda, survivor of the genocide in 1994 and now responsible for Aegis, which is worldwide active in the field of genocide and massacres, Lilian Tintori, the wife of Venezuelan opposition leader Leopoldo Lopez, who was put for 14 years in prison and Ilse & Femke van Velzen, who make documentaries that give oppressed people a voice. The awards were handed over by Victor Ochen, Sharon Stone and Katja Riemann.

Finally, several artworks were auctioned under the supervision of an employee of a large and well-known auction house and Sharon Stone.

Before and after the Gala I had some conversations that I do not want to withhold. First Mary Aiken, worldwide expert in the field of cyber crime. Her book ‘The Cyber Effect’ was published in America and England and is being translated into German and Dutch. She is an adviser to Europol, Interpol, is on the board of The Hague Justice Portal and teaches at University College Dublin.

“Cyber never sleeps”, she says. “The Cold War has been replaced by the Cyber War. I made studies of the impact of new technology on human behavior, more specifically, the criminal behavior. I my book I sketch a broad picture , on the basis of the development of man from birth to man of advanced age. It is a result of decades of studying, writing and teaching. Among other things I elaborate on the sliding surface in which young people find themselves who occasionnaly go into hacking. From the side of criminals there are great efforts to get these young people in their camp.”

Then Mugge Fischer, who came from Spain to donate a painting for the Foundation. “Together with Ose del Sol / Artenovum I have the project ‘Donnas del Mundo’. For this occasion I made a portrait of the Donna of Peace. This Donna speaks with her eyes. ‘Wake up’ she says, ‘you should do what you can do.’  The Foundation may use this Donna of Peace in every way possible. They may print her on t-shirts for example, it could be on the cover of the Anthem. Each of the paintings in the Donna series has a godfather. The godfather of the Donna of Peace is Victor Ochen. We hope to auction the painting at a hefty price. The proceeds go to the Foundation of Florence Olara.”

What he thought of the Gala? “Impressive, well organized, a good audience. The speakers told what it was about. You realize then that you belong to the lucky 2 or 3 percent of the world which escapes misery. The Gala was a bit on the serious side. We have also Gala’s in Spain, where there is more glitz and glamor. We hope to have contributed a bit for the good cause. An important element of the Foundation is education. If children have good parenting, you get better results.”

And Joe Redston from England (Isle of Wight) who orchestrated and recorded the song ‘Ever Changing World’ with his father David. “We processed the elements that Florence Olara brought in for the song. It would be nice if a superstar would interpret the song of Dario Poli and David Mairs. That could greatly promote the awareness about the work of the Foundation. And of course the Foundation will benefit from the proceeds.”

Redston, musician/drummer, engaged in team-building activities, says, looking back at the Gala: “I learned very much about objectives, values and aspirations of the Foundation. The speakers’ stories make you humble. We tend to forget how good we have it.”

And finally Dario Poli: “I worked together with David Redston, Joe’s father on ‘Diana, the Musical’. Joe was eight years old. Now Joe and David make this musical masterpiece. My thoughts were all the way back to the old days.”