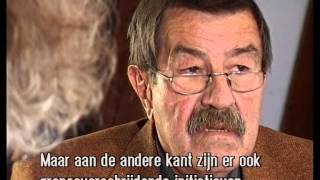 Günter Grass (1927-2015) was a Kashubian-German novelist, poet, playwright, sculptor and recipient of the 1999 Nobel Prize in Literature. He was born in Gdansk, Poland (former Free City of Danzig). As a teenager he served as soldier from late 1944 in the Waffen-SS, and was taken prisonar of war by U.S. forces at the end of the war in May 1945. He was released in April 1946. Grass started writing in the 1950s. In his fiction he frequently returned tot he Danzig of his childhood.

He is best known for his first novel The Thin Drum (1959), a key text in European realism. The novel was adapted as a film of the same name, which won both the 1979 Palme d’Or and the Academy Award for Best Foreign Language Film. Grass was for several decades an active supporter of the Social Democratic Party of Germany (SPD) and its politics. He took part in German and international political debate (a.o. Gulliver Meetings). In the 1980s he became active in the peace movement. During the events leading up tot he reunification of Germany in 1989-90, Grass argued fort he continue separation of the two German States. He asserted that a unified Germany would be likely to resume its role as belligerent nation-state. This argument estranged many Germans, who came to see him as too much of a moralizing figure. On 26 April 2012, Grass wrote a poem critizing European policy for treatment of Greece in the European sovereign-debt crisis. In “Europe’s Disgrace” Grass accuses Europe of condemning Greece to poverty, a country “ whose mind conceived Europe.