Home » Agenda » Activity » Eye Film Museum, If ever we get to heaven, William Kentridge (1955, South Africa) 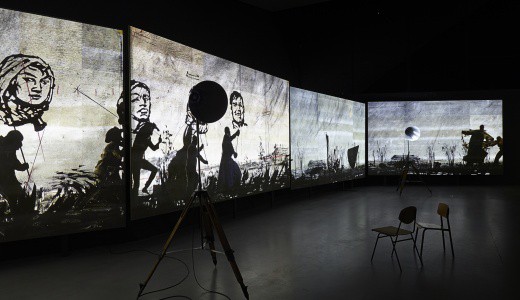 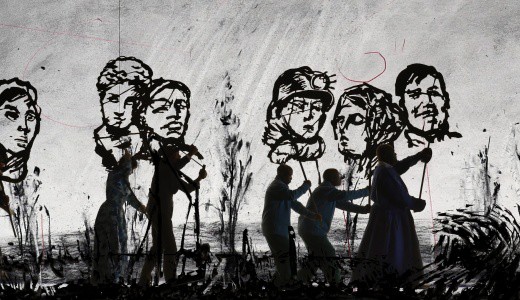 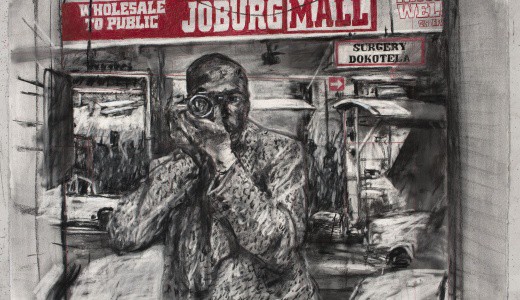 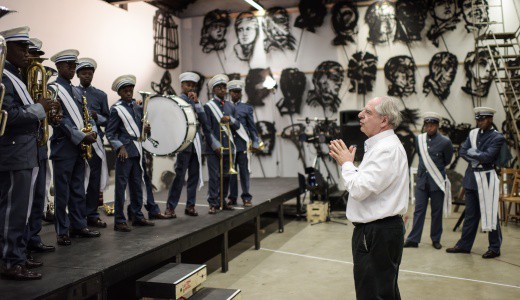 William Kentridge is an artist working with several techniques. He makes charcoal drawings – which go beyond drawing – animates fims and creates installations. And there’s more.

At the entrance to the exhibition at the Eye, you will see 21 b/w cut-outs from cardboard: portraits, a pigeon, a typewriter and an old fashion bathtub to mention only a few. Seventeen of the surfaces have been painted black; three have been hung with their backside to us and we see the wood structure that holds it all together.

This is essentially an introduction to a truly monumental and animated film. The film, in b/w, is projected on eight floor-to-ceiling screens and is 45 meters long. Each screen is flat against the wall or titled. It “depicts a never-ending procession of people passing by as they drag with them all sorts of belongings and objects.” He does the landscape which is the background to the people’s trek, in charcoal. The cut-outs you have seen in the first gallery are used in the film.

The story reflects the many facets of South African history. The musical score is no less impressive. African tribal themes with haunting melodies and a section that is reminiscent to a work played several times in Terry Gilliam’s Brazil. The imagery is simple but captivating. The figures illustrated are an eclectic grouping and even include three dancing skeletons. The sounds are projected, to the audience, through megaphone-like speakers that were used, before microphones, by crooners, to project their voices. In a word, this installation is IMPRESSIVE!

And there is more. I am Not Me, the Horse is Not Me (2008) is based on The Nose by the Russian writer, Nikolai Gogol. Kentridge found his artistic inspiration from the Russian avant garde of the 20s and 30s of the last century; and the opera that Shostakovich wrote based on the same work. And again, we see this “opera” played out on eight individual screens. It was originally shown at the Metropolitan Opera House, New York.

Through the exhibition period seven sideline programs are on the schedule. Each features a work or works form Kentridge’s oeuvre and with discussion. The discussions are conducted by various people, like Raymond van den Boogaard, an analyst of Russian affairs. On the 13th of June. There was the screening of “Two major LuLu films back to back, accompanied by live Music.” (N.B. For the Dutch National Opera, he is directing Alban Berg’s opera LuLu for the Holland festival, 2015.) In collaboration with the Prince Claus Fund the South-African anti-Apartheid activist and Judge Albie Sachs discusses the history of the country.

Thre is a lavishly illustrated publiaction. It documents the creation of the new work More Sweetly. Play the Dance in words and pictures with an essay by William Kentridge. Published by the EYE and nai010 and is for sale at 19.50 euro. In English only.